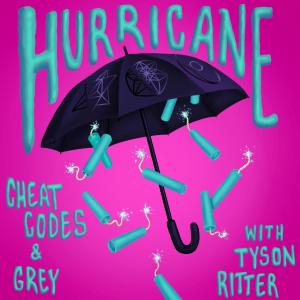 LOS ANGELES, CA, USA, September 24, 2021 /EINPresswire.com/ — Multi-platinum hit-making trio Cheat Codes, popularly known for their smash single “No Promises'' (feat. Demi Lovato), are turning out new music at record pace by releasing their third single off of their highly anticipated album Hellraisers, PT 2. Hurricane features Alt Pop Favorite Tyson Ritter of All American Rejects. Coming off their Country-Pop crossover single, “Never Love You Again” with Little Big Town and Bryn Christopher, the chart-topping artists are back to showcase yet another dimension of their musical talents with their newest collaboration. “Hurricane” is available now on all digital streaming services.

“Hurricane” is a perfect alt pop single that combines rock, and pop influences into one. Co Written by Grey and Tyson Ritter the song has a new fresh vibe that will have you listening on repeat while dancing with friends.

“This is the last single we are releasing before Hellraisers Part 2 comes- we knew it would be tough to follow our collabs with Travis Barker and All Time Low but we feel like we raised the bar here. We grew up listening to Tyson and All American Rejects so having him on our record is a huge honor and Grey have always set the standard for the highest level of production so its been great to work with those guys say the Cheat Codes.

“We wrote this song with our good friends in the middle peak of Covid over a zoom call and to us it kind of felt like the anthem of our return back to normal life. Like just going out and being crazy with our friends again like old times. We were super hyped on working with cheat codes and Tyson on this cause first of all Tyson is an absolute legend and we grew up screaming his songs in the car. And cheat codes have been killing it for ages and we’ve always loved their approach to dance music say Grey."

Tyson Ritter adds “There’s something about when the right song appears at the right time… in the past when I had written for my band The All-AMERICAN Rejects, there was always this feeling in the room, or I’d see a ladybug climbing up a window drape telling me to press record and capture what I was writing. Hurricane fell into my inbox like that. When I first listened to the demo, what struck me was the beautifully delivered vocal by Grey, and frankly I heard it and said to myself “can I sing this song?” There were nuances to the vocal that I knew I couldn’t re create, yet i felt something pulling me, daring me to approach it. I guess that was the lyric, “maybe they’ll name a Hurricane after us”. To me it was iconic, never before being muttered in song, and that was the allure. Beneath it, a story of a road that was checkered with self sacrifice, lost ways, and a broken heart kind of reflection. Yet in the chorus there was a harkening back to the yesterday’s that we all could find as glory, for me it tasted like a field party red Dixie cup poured out of a the bed of a pickup truck, smelled like CK1, and felt like young love heartache. I cherish those days, and that this song embodied the journey from then to about a year ago for me. It made me compelled to do it. I’ve never sang like this in verses before, and to change, adapt with time to dare myself, was liberating. Grey are incredibly talented songwriters, Cheat Codes are illustrious troubadours in an ever evolving dance music landscape, for me, it was everything right at the everything right time to be a part of it. And you never know, maybe they will name a Hurricane after us.”

Cheat Codes released the first part of their debut album Hellraisers, Pt. 1 in May. The highly anticipated release featured tracks such as the lead single “Lean On Me (feat. Tinashe),” “Stay (feat. Bryce Vine),” “Do It All Over (feat. Marc E. Bassy),” and “Hate You + Love You (feat. AJ Mitchell).” The name of the album, “Hellraisers,” was the nickname given to the group by their late manager, Michael Theanne, who passed away over a year ago, describing their playful and adventurous lifestyle. The album itself has three parts – each part has a distinct sound influenced by each member. This first part is focused on Trevor’s pop-leaning sound, while the second part will be focused on KEVI’s hip-hop flavor, and the third part will be focused on Matthew’s dance-influenced sound. The album was followed by the official music video for “Lean On Me,” the Hellraisers, Pt 1 Remixes album featuring electronic dance music artists Morgan Page, Michael Calfan, and more, and the country-influenced “Never Love You Again” with Little Big Town and Bryn Christopher.

ABOUT CHEAT CODES:
Simultaneously trafficking in electronic, pop, hip-hop, and alternative at the same high speed, the Los Angeles trio Cheat Codes remains an inescapable force throughout popular culture. Their total stream tally eclipses a staggering 6 billion plays. Maintaining a prolific pace, they’ve steadily amassed a diverse discography, including the platinum Pop Radio Top 5 smash “No Promises” [feat. Demi Lovato], the gold-certified “Feels Great” [feat. Fetty Wap & CVBZ], and gold-selling breakout “SEX” with Kriss Kross Amsterdam. Speaking to their international impact, “Only You” [feat. Little Mix] soared to #1 on Pop Radio in the UK, while they received dozens of platinum certifications in 20 countries. Not to mention, Liam Payne, Kim Petras, Wiz Khalifa, and Sofía Reyes all jumped at the chance to collabo on rate, and they did remixes for Ed Sheeran and Sam Smith. Igniting clubs worldwide, their 2019 level 2 EP yielded the #1 Dance Radio hit “Who’s Got Your Love” [feat. Daniel Blume] in addition to “Ferrari” [feat. Afrojack] and “Be The One” [feat. Kaskade].