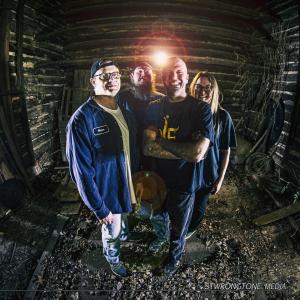 It takes a singular rock band to tell a story as outrageous as "Killdozer" – one with the muscle, imagination, and sheer indignation necessary to do it justice.

On June 4, 2004, Marvin John Heemeyer cut through bureaucratic red tape in the most emphatic way possible. He drove his tricked-out and heavily-armored Komatsu through the Granby, CO Town Hall – and knocked down several other buildings including the house of the former mayor. They called his vengeance machine The Killdozer, but it's really a misnomer: Heemeyer didn't hurt anyone. He just destroyed the civic infrastructure of a town that he felt was ripping him off. In so doing, he became a folk hero to anybody who'd like to take a hammer to the system, which, in modern society, means practically everybody.

The Killdozer has inspired books, think pieces, commentary, documentaries, and at least one movie adaptation. But until now, the legend hasn't been immortalized in song. It takes a singular rock band to tell a story as outrageous as "Killdozer" – one with the muscle, imagination, and sheer indignation necessary to do justice to Heemeyer's act of audacity. North Carolina's Lords and Liars is a band like that, and they bring Heemeyer's ride to life with concrete-shattering and pillar-toppling force. Just like the Killdozer itself, Lords And Liars is a relentless metallic machine that, once on the move, there's no easy way to stop. Heemeyer assembled his destructo-mechanism from parts: concrete slabs and sheets of steel and plenty of weaponry. Lords and Liars' distinctive sound is made from disparate sources, too: classic '70s metal and vintage thrash, some way-out-there, Primus-style alternative rock, some thumping, grinding industrial music, and even a little hooky singalong punk, all held together by pure force of will. When these musicians get going, nothing stands in their way.

Not content to simply tell the tale of Heemeyer's rampage (which they do, in language that's both forceful and poetic), they've matched their verses to music that evokes the power and menace of the Killdozer. The beats are precise and deliberately mechanical, angry but directed. The guitars are savage, serrated, and sharp-toothed; they're a cutting edge driven by a relentless motor. Then there's the vocal performance from Gray Tyson: outspoken, articulate, fierce, and unsparing, loudly announcing the advance of the homemade tank. There was nothing subtle about the Killdozer, and the Lords and Liars single is comparably direct and similarly unapologetic.

The same could be said for Tony Murnahan's wonderfully brutal clip for "Killdozer," which is dedicated to Marvin John Heemeyer. The director follows Heemyer's narrative to the letter: the meetings with shady politicians, the gleeful demolition spree, the police response, the tragic conclusion. He's found plenty of jaw-dropping footage of the real Killdozer in motion – Heemeyer affixed several cameras to the walls of his makeshift tank and preserved his one-person insurrection for posterity. But for sheer explosiveness, nothing compares to the footage of Lords and Liars in action. Gray Tyson is a dynamo, bellowing, popping up at odd angles to address the camera, telling the story of a like-minded miscreant with a will to upend the wicked world he knew.