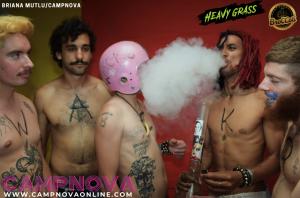 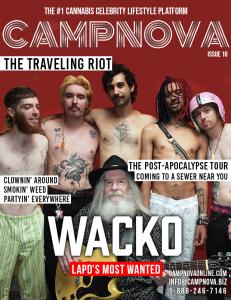 LOS ANGELES, CALIFORNIA, UNITED STATES, July 21, 2021 /EINPresswire.com/ — Wacko the punk band from Long Beach, Calif. spends a day with CampNova as they prepare for their secret concert. Causing a disturbance everywhere they go with their huge underground fan base they have been named, The Traveling Riot by the Los Angeles Police Department. Prior to disrupting oncoming traffic on the 110 freeway in May, the band walked into a Denny’s in December 2019 and ended up shutting the restaurant down while completely performing a live concert with a mosh pit that destroyed the inside of the restaurant.

CampNova reporter, Briana Mutlu, with Broccoli Brands and Heavy Grass, explored Wacko’s shenanigans, art, music and spent a day with The Traveling Riot. In this piece, for those unfamiliar with the chaos, yet freedom of expression, Wacko is stirring, Mutlu provides a safe space for the band of weirdos to openly discuss their artistic vision and mission. Mutlu also spent over 24-hours with the band to get a full understanding of “Why the LAPD has dubbed them — ”The Traveling Riot.”

“We were always clowns, it just took certain experiences in our lives that led us to understand that about ourselves,” Jakeem also said about his alley of clowns. “You can’t work and play unless you’re a clown. [And everyone knows] clowns know where the best parties are at.”

The band itself is composed of Zaine Jakeem, Luc Robitaille, Matthew Robinson, Andrew Lane, Michael “Papa Michael” Robitaille and Jon “Jon Boi” Hanson — famed for the Pink Helmet. However, The Traveling Riot itself is composed of 30 plus people who are spread throughout Long Beach. Maybe this is a band of weirdos to some. And while they do don the most outlandish ensembles and makeup, the ragtag crew at heart is the essence of punk culture, drowned out by the image of chaos that pervades punks in the media.

“There’s not much distinction between the band and the audience,” Papa Michael said. “There’s no us and them anymore. We’re all together.”

Growing accustomed to smoking cheap weed, the band was beyond stoned once introduced to Broccoli Brand Sunset OG and Trainwreck followed by spliffs and Heavy Grass’ sativa, hybrid and indica.

“So stoned you’re going to need a wheelchair,” was what actually happened when Jakeem sprained his ankle while smoking, hence the wheelchair and crutches.

There’s no telling where this alley of clowns — The Traveling Riot collective will perform. They’ve been known, as of late, to perform in sewers, old abandoned buildings, a random skate park or an actual venue. Giving the greater Los Angeles a break, Wacko is heading tour throughout August for their Post-Apocalypse Tour.

“[Some] venue owners in L.A. are putting eyes on the internet to find out where shows without permits or generator shows are happening,” Jakeem said. “and one of the bands they’re watching is us.”

For exact times and locations, concert-goers have to stay tuned to Wacko’s Instagram as all of the locations are not announced until the day of the show and are secret until then.