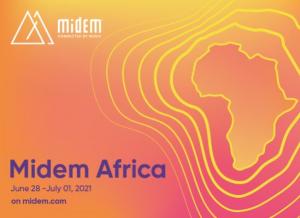 At Hitlab we understand the mega value of the African Music market and the potential it represents.”
— Michel Zgarka, President & CEO, Hitlab Inc.

MONTREAL, CANADA, June 22, 2021 /EINPresswire.com/ — Michel Zgarka, President & CEO of Hitlab, Inc. has announced the company’s participation as a key sponsor of MIDEM Africa, the first pan-African digital music event dedicated to the continent’s vibrant music community, to be held June 28 – July 1. Mr. Zgarka has been taking part in MIDEM for over 4 decades and has come to consider this gathering as one of the most significant music industry forums.

Mr. Zgarka says: “Midem’s focus on Africa this year is timely. At Hitlab we understand the mega value of the African Music market and the potential it represents. It is why we recently launched our unique, artist discovery platform, the Digital Emerging Artist Showcase (DEAS) powered by our patented AI software, Digital Nuance Analysis tool in four regions of Sub-Saharan Africa. And we have partnered with two industry leaders in the digital, streaming, and download service – TRACE and Boomplay to maximize our reach. Through DEAS we are engaged in discovering some of the rich musical talent from Africa and providing them a global audience – our way of democratizing the music industry and making music accessible without borders.”

In addition to its role as a key sponsor of MIDEM Africa, Hitlab will bring its knowledge-based resources, hosting a panel discussion: Music Meets Technology™ – Hitlab the "Democracy" of Music – Talent Without Borders ™, centered on the utilization of AI for music analysis and how it has become the “must-have” tool for those within the music community. The panel will be moderated by Mr. Zgarka and will include experts in the field of tech, R&D, and music in a conversation on the application of AI technology across the music universe.

The company also plans to make several important announcements and presentations in connection with the launch of DEAS Africa. Included among the many exciting news items they plan to unveil, is a series of radio and television deals aimed at enhancing the visibility of top-ranked, or “best of the best” DEAS artists and providing them with a wider audience reach.

This year’s four-day event will focus on the growing importance of Africa’s music industries and the continent’s vibrant music markets. The conference will highlight the most exciting trends and opportunities coming from the continent; as well as provide key insights and practical tools to foster the idea of networking that can accelerate careers and business opportunities among the most influential local musicians, and their regional and international counterparts.

The Midem Africa program is part of a long-term plan initiated by Midem in 2018, which has already resulted in 10 events across 6 countries and 7 African cities, as well as the presentation of the Midem African Forum. All of these initiatives are meant to support, grow, and connect the African music markets to the international community. And this aligns perfectly with Hitlab’s idea of “music without borders” or the democratization of the industry. Both organizations see the diversity and rich cultural heritage of the African markets, the influence of its artists across all genres of music, the continent's rapid mobile and digital adaptation as important factors in creating a bridge between the continent and the rest of the world.

About HITLAB (A Digital and Media Entertainment Company)
HITLAB is a digital media & entertainment company that is revolutionizing the way cultural content is discovered, produced, and consumed. Using patented AI technology and innovative software developed in-house, to connect, engage and create strong interactions between consumers and brands. The company has a growing list of well-established national and global relationships with creative professionals, record companies, publishers, executives, producers, managers, media outlets, venues, and promoters.

About Midem
Home of the Global Music Community, Midem is the world’s leading music business event, which unites, connects, serves, and supports the global music ecosystem to exchange, create, play, forge relationships and shape the future of the industry. With a rich 4-day programme of conferences, competitions, networking events and live performances, music makers, cutting-edge technology companies, brands and talent come together to enrich the passionate relationship between people and music, transform audience engagement and form new business connections.