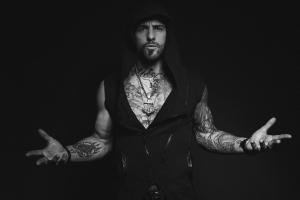 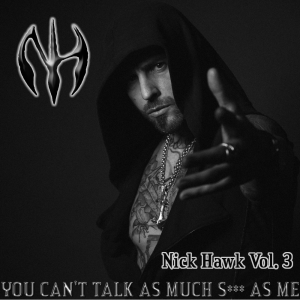 Nick Hawk – You Can’t Talk As Much Shit As Me

It's got an intensity born of focus, not fury; it's the work of an artist with something to say but nothing to prove.

As a song title, "You Can't Talk As Much Shit As Me" is an attention-grabber. It's an impossible statement for anyone to make – until you meet Nick Hawk. Where do you begin with this guy? He's the breakout star of Showtime's Gigolos. He's a Brazilian Jiu-jitsu black belt and world champion, an Air Force vet, and author of 100 Kicks in the Ass. Penis insured for a cool mil – not a typo. He's a Kundalini-Tantric Sorcerer; he dives with Great Whites… Suffice it to say, he's less a jack of all trades, more of a king of them. Hawk made his musical debut in 2012 and now has a gold record (for the single "We Fight")and 15 singles under his belt. His music has been featured on Eminem's Shade 45 "The All Out Show", he freestyled on 50 Cent's "This Is 50" show. He wrote a song for and co-starred in the movie American Justice, and has performed at The Palms and Planet Hollywood in Las Vegas. "You Can't Talk As Much Shit As Me" isn't even a challenge to would-be bigmouths. It's here to let all comers know that the match is over, and the belt goes to Nick Hawk.

Hawk has always had the music in his heart. Growing up poor, he had the fire but not the funds – so he started out rapping. He slowly bootstrapped his way from corner poetry to owning a guitar, then a drum set, then a grand piano. Now the man is his own band. "YCTAMSAM" is a gritty, literate hip-hop banger set to a skittering trap beat that. Musically and lyrically, it owes a debt to old schoolers like Em and Method Man, fellow fighters who, like Hawk, clawed their way to the top. The opening track off his third album is at once a slow burn and a lit blowtorch. It's got an intensity born of focus, not fury; it's the work of an artist with something to say but nothing to prove.

Adapt. Improvise. Overcome. All in a day's work, right? Shot on Sunrise Mountain in Las Vegas, Hawk made the climb for the very first time just for the video. He scaled 30-foot walls and ultimately had to leave his camera person behind. He packed a tripod just in case, but as luck would have it, a fellow hiker happened by, and Hawk paid him a couple hundred bucks to get some shots right on the spot. The clip jumps from Sunrise Mountain and the breathtaking backdrop of Las Vegas and Lake Mead – Hawk's very own backyard – to Hawk on his speedboat – the spoils of a life so full, there's simply no time to talk shit.