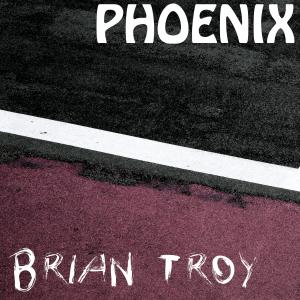 Phoenix is Available Now on All Major Platforms

Phoenix is a blend of wistful, acoustic songs and rock-n-roll tunes, self-produced by Brian, and features drummer Byron Guernsey on the single “Spectators”.

Throughout Phoenix, Brian opens up to listeners about longing for a normal life and missing human connection, while also dealing with deeper matters of personal depression.

From the first track, “Rock Star”, Brian provides perspective on how he sees life as he is getting older. He often fantasizes about living the rock-star life, further connecting with listeners, and bringing awareness on social issues.

What makes Brian’s music so honest is the fact that he doesn’t write for anything or anyone but himself. “I write songs to get those emotions out of my head. Hopefully, other people can relate.” Brian says as he has spent a lot of time reflecting in the last year. The controversial moments in 2020, such as racial injustice and the pandemic, inspired his creation of the 12-track album, Phoenix.

Phoenix will be available on March 5th on all major platforms. To stay up to date on his latest projects, follow Brian Troy on Facebook or visit his website.

Brian is a Louisville-based musician and songwriter, skilled at playing the trumpet, bass, guitar, keys, and drums. After attending the University of Louisville on a music scholarship, studying music composition, Brian played in local Louisville bands and started releasing singles and his first full-length project. His first full-length album Factotum was released in 2016. Brian’s other project, “John From Cargo”, features punk rock that touches on controversial topics of politics, social justice, and being vocal on the world today with equality.