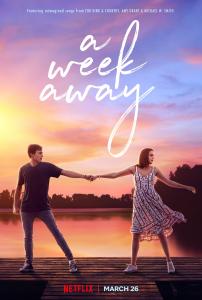 LOS ANGELES, CA, UNITED STATES, February 22, 2021 /EINPresswire.com/ — Netflix has released the trailer for their upcoming family musical, A Week Away, which tells the story of troubled teen Will Hawkins (Kevin Quinn) who has a run-in with the law that puts him at an important crossroad: go to juvenile detention or attend a Christian summer camp. At first a fish-out-of-water, Will opens his heart, discovers love with a camp regular (Bailee Madison), and sense of belonging in the last place he expected to find it. A Week Away releases Friday, March 26th, 2021.

Soundtrack Coming Soon!
The official “A Week Away” soundtrack will be available for pre-order on 2/26 accompanied by the release of 3 early singles: “Let’s Go Make A Memory,” “Place In This World,” and “Best Thing Ever (Stage Version).” The full 13 track album is set to release on 3/19 at all digital streaming providers, and will include special features by Johnnyswim, Tauren Wells and Riley Clemmons.

A Week Away Trailer