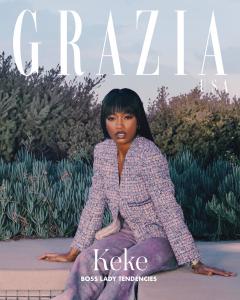 The multi-talented personality is featured as the publisher continues to break boundaries with a digital-first video cover of the star launching on TikTok.

At Grazia USA we view everything through the lens of optimism, joy, and ambition. As I planned my first digital covers, I sought out women like Keke Palmer that celebrated all these ideas.”
— David Thielebeule, Grazia USA Editor in Chief

The multi-talented star was photographed by Texas Isaiah, a first-generation Black Indigenous American photographer and contemporary artist born in Brooklyn, New York. He is the 2019 recipient of the Getty Images: Where We Stand Creative Bursary grant. The video was directed by Curtis Taylor Jr., a director and cinematographer from St. Louis. Palmer was styled by Chris Horan.

Grazia USA Editor in Chief David Thielebeule noted, “At Grazia USA we view everything through the lens of optimism, joy, and ambition. As I planned my first digital covers, I sought out women like Keke Palmer that celebrated all these ideas. Each of our cover stars has also continued to evolve and really thrive throughout the pandemic, which I find extremely inspirational – and hope our users will, as well.”

Palmer was recently signed to star in famed director Jordan Peele’s next tops-secret project. She also is currently launching Foodtastic, a new 11-episode unscripted competition series on Disney Plus featuring challenges revolving around Disney-inspired foods. Palmer explained that “[Disney] embraces my ideas and they allow me to stretch my wings, they allow me to fly because they trust me as a talent. I think that’s huge. When you are trusted to be who you are and the things you say are valued, and they can make a difference.”

The project also allows her to be a part of the culinary world, a hobby she appreciated during quarantine. “Whether you're nourishing yourself or you're cooking for others, you can just zone out on your own and you don't really have to do anything, just focus, and then you're sharing and giving to others and fulfilling others.” Palmer also said that “anything that's telling me what to do, step by step, or giving me some type of order to follow through with, I love that. For a moment, the pressure of ‘creating’ is off.”

Palmer has found a strong social media following with her commitment to authenticity. Learning how to navigate the bad with the good comes down to cultivating her own confidence. “I do turn off any of the derogatory things on my page in my settings,” she explained. “But I think for the most part I really try to focus on making sure that I can control myself, because you are never going to be able to control other people or stop other people from saying things to you, whether it be online or in the real world. So the best thing you can do is make it to where you’re so strong that the things that people say to you don't affect you.”

With her new show and upcoming projects, the star is focused on mentorship. “I don't want to always be Keke Palmer, the star. I want to be able to encourage other people and create platforms for others to grow and shine the way that others have seen me do,” she explained.

Having just launched three months ago, graziamagazine.com already has amassed 2.2 million users for the month of January alone, establishing itself as the fastest growing publisher in the fashion category, with almost 50% of the audience women aged 18-34. The brand’s social reach, defined as the total number of people to reach across all of Grazia USA’s various social media networks, was 3.1 million in the month of January.

As part of its roll-out strategy, Grazia USA also will publish a 400+ page quarterly print edition, beginning in September 2021.

ABOUT GRAZIA:
Grazia is Italy’s fashion bible, published by the Mondadori Group. For more than 80 years, Grazia has remained in step with changing tastes season after season, style after style. At the top end of quality and design, Grazia is the most accomplished ambassador of the “Made in Italy” brand and is a preferred advertising vehicle for designer, fashion, and beauty companies. Thanks to its experience, excellence and brand value, Grazia is the first Italian weekly magazine to extend its successful formula abroad, creating the most dynamic network on the market with 21 editions worldwide in 23 countries.

ABOUT PANTHEON MEDIA GROUP, LLC:
Pantheon Media Group (PMG) is an independent next-generation media company that brings one of the most prestigious European fashion magazines to the biggest fashion market in the world. PMG is the exclusive publisher of Grazia USA, the latest franchise of the iconic fashion bible,
first launched in Italy in 1938 by the Mondadori Group. Also uniquely focused on beauty, culture, society, status, celebrity, and luxury, Grazia USA publishes digitally first and later in print, with the release of the first of its quarterly 400-page magazines in 2021. Grazia USA does more than just inform and inspire an educated audience of influential readers: It is unlike anything the fashion industry in the United States has ever seen. We do not serve readers, we serve users. PMG is a 360-degree media business that is poised for the future, broadening storytelling into virtual and augmented reality, video, television, audio, e-commerce, live events, branded content, innovative advertising solutions and beyond. PMG is headquartered in New York City.