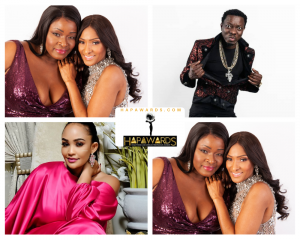 LOS ANGELES, CA, UNITED STATES, January 25, 2021 /EINPresswire.com/ — The 5th Hollywood and African Prestigious Awards (HAPAWARDS) is now accepting submissions for categories in the film, movie, televisions, comedy, fashion, art, and literary areas for its upcoming live show event November 5-7 2021. Despite the COVID_19 pandemic, the committee is working diligently to put together the live ceremony in the safest way possible in person in Hollywood California.

Last year the HAPA Awards were held virtually. The theme was “I am Because We are One” (Ubuntu). This represents the unity between all nations and humanity. It was hosted by comedian Michael Blackson and South African Social Media Influencer: Zari “The Boss Lady. The red carpet, live performances, pre, and after-party were held on a worldwide virtual stage in countries such as South Africa, London, New Orlean, Las Vegas, New York With Celebrity host African Nigerian native Nestreya and American comedian Memphis Will on the HAPAWARDS Virtual extravaganza.

We would also like to send our condolences to Executive Secretary National Art Council of Tanzania, Godfrey Mngereza, who received the Empowering Artists to Achieve Goals during the 2019 HAPAwards. He recently passed during the 2020 holiday season.

The HAPAwards honors American and African community leaders, international political figures, dignitaries, and stars who are pioneers in motion pictures, arts, music, and comedy. The I Dream 4 All Foundation presents the HAPAwards every year which provides tax write-offs for our sponsors to achieve our goals of giving back to the less fortunate. The 5th Annual HAPA Awards Show will be held November 5-7, and the location will be announced later. It will broadcast in the US and more than 50 countries and territories worldwide. Watch the full recap of the 2020 Hollywood African Prestigious Awards show on the website.

To schedule an interview or speaking request, please contact HAPAwards Headquarters
correspondence@hapawards.com or at 310-887-1388.