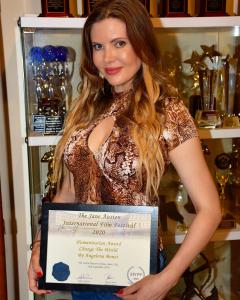 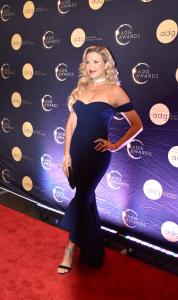 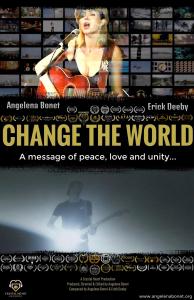 Australian filmmaker, singer-songwriter and humanitarian, Bonet, is 'changing the world' as she wins at The Jane Austen International Film Festival in the U.K.

I'm so proud to receive the 'Humanitarian Award'. When I found my courage to speak out about the crime that almost took my life, I essentially chose to support humanity. I am so grateful – thank you!”
— Angelena Bonet

Bonet's multi-award winning documentary short film "Change The World" and soundtrack feature the songs she co-wrote from her heart and soul with her late fiancé Erick Deeby. He had written and recorded instrumental pieces of music for her between 2005 and 2007, then suddenly and unexpectedly passed away three days after they got engaged in August 2007. Bonet then wrote the lyrics and melody to his music after his devastating death and during her time of deepest grief. Then on May 26, 2012, she was a victim of a violent attack and was kidnapped and gang-raped but miraculously survived the attempted murder in Melbourne, Australia. Suffering Post Traumatic Stress Disorder (PTSD) as a consequence of the heinous crime, orchestrated by someone that she knew and trusted, she is now ready to share her story. Her film has won in every market around the world and she has recently released the film on YouTube to make it available to everyone for free. She realises that many women and girls who could benefit from her voice and inspiration may be at a financial disadvantage and wants to help them and not expect anything in return. Domestic violence has risen substantially since the Covid-19 global pandemic began and many victims are in lockdown with their abusers. Angelena hopes to reach those women and give them hope and assure them there is light at the end of the tunnel.

Angelena Bonet is a warrior in the fight to end violence against women. With a fierce commitment to helping victims heal and take back their life, she brings to bear a multitude of talents, wisdom and personal experience. Only from the depths of her despair and darkest days has she truly found her voice and the courage to share her experiences and to speak out about issues generally swept under the carpet by society. With multiple outlets for her commitment to supporting non-violence and health recovery, Bonet has also produced a biopic documentary feature film trilogy series consisting of "Angelena: Change The World", "Angelena: Heart Of The Matter" and "Angelena: Light At The End Of The Tunnel". From a former Australian supermodel to a global voice for women and girls, Bonet’s award comes at a time when women’s voices need to be heard more than ever. JAIFF's mission is to create a film festival that gives independent filmmakers a genuine opportunity to have their films screened. They believe there is disenchantment with the anonymity and exclusivity of the festival circuit and lack of support for art, experimental, documentary and animation films. They aim to show and give awards to films from emerging talents and independent filmmakers, based primarily on their skill set, artistic expression and originality.

Angelena is nominated for more awards and 2021 is shaping up to be another incredible year for the emerging Australian filmmaker.