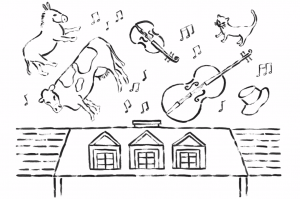 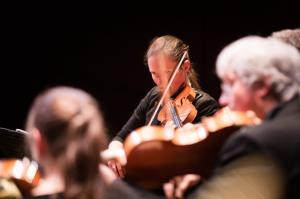 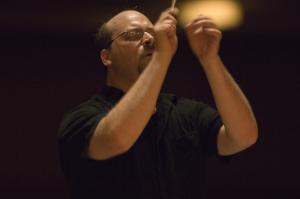 Kenneth Woods is orchestrator and conductor

A hilarious re-telling of the traditional English folk tale, Lazy Jack, relocated to the Ukrainian shtetl and brought to life with abundantly witty Yiddish turns of phrase and evocative Klezmer musical stylings by Jewish-American composer David “Yankele” Yang and orchestrated by Kenneth Woods.

Following the successful launch of their new series of virtual storytelling concerts with the premiere of Kenneth Woods’s ‘The Ugly Duckling’ narrated by Hugh Bonneville, the English Symphony Orchestra (ESO) are thrilled to welcome Henry Goodman to narrate David Yang’s hilarious Klezmer-inspired work, 'Lubin, from Chelm'. The film includes performance footage of Goodman and the ESO alongside pencil drawings by Canadian artist, Alisa Snyder and is suitable for both adults and children to enjoy.

Henry Goodman has long been one of the most admired and accomplished British actors of his generation, equally at home on the stage, in film and on television, as well as being a highly sought-after voice actor. As a leading Shakespearean, he is a renowned interpreter of the title role in Richard III and Shylock in The Merchant of Venice. His Awards include two Olivier's for Best Actor and a nomination for Best Actor in a Musical (Chicago). Of Jewish descent, Goodman won universal praise in the iconic role of Tevye in Trevon Nunn’s revival of Fiddler on the Roof.

Chinese-Jewish-American composer and violist David Yang is the founder of the Philadelphia based musical storytelling troupe Auricolae. 'Lubin, from Chelm' is one of five works in Yang’s “Chelm” series, which have drawn universal acclaim for their distinctive humour and virtuosic Klezmer stylings. Yang is Director of Chamber Music at the University of Pennsylvania, and Artistic Director of the Newburyport Chamber Music Festival.

Yang and conductor Kenneth Woods, who is also Artistic Director of the Colorado MahlerFest, are long-time colleagues as violist and cellist in the string trio Ensemble, Epomeo, and so it was natural that Yang entrusted Woods with the orchestration of 'Lubin'. “I’ve probably played the original duo version of 'Lubin' over 100 times,” says Woods. “Orchestrating it was just a joy; David’s music and his use of language are so clever that it’s actually quite easy to expand a piece that is originally just two voices into something much more elaborate. There’s just so much to work with.”

Illustrator Alisa Snyder was born in Providence, Rhode Island and has lived most of her life in Halifax, Nova Scotia. She holds a BFA from the Nova Scotia College of Art and Design and an MFA from Southern Illinois University at Carbondale. Landscape and still life are the primary subjects of her painting, and central to her work is an emotional response to nature. “A love of music has always been a part of my life and practice as a visual artist,” says Snyder, “and illustrating David Yang’s score and story was a special pleasure.”

Future instalments in the series include contributions from Davood Ghadami, who narrates 'The Warrior Violinist' by Jay Reise; a re-working of one of the world’s oldest folk tales believed to have its origins over 6000 years ago in Egypt. Henry Goodman also returns to narrate Tom Kraines’s setting of the Brothers Grimm classic, 'Hansel and Gretel'.

'Klezmer' is a musical tradition of the Ashkenazi Jews of Eastern Europe
https://www.jmi.org.uk/about-us/music-genres/klezmer/