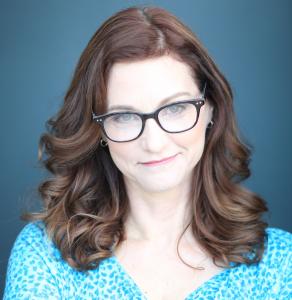 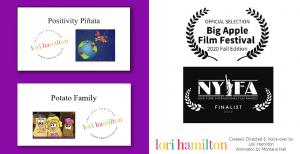 These timely narratives were designed to encourage and uplift audiences worldwide

I want to inspire empathy, curiosity and a desire to see the best in others.”
— Lori Hamilton

NEW YORK, NEW YORK, UNITED STATES, December 3, 2020 /EINPresswire.com/ — Comedian Lori Hamilton has written and voiced two beautiful feel-good short films throughout the pandemic. The films are designed to inspire kindness and foster bravery during these difficult and constantly changing times. Both films garnered attention from New York’s independent film scene and chosen as finalists in the New York International Film Awards competition and selections for Big Apple Film Festival. While the films were the creations of Hamilton, both were animated by Montana Hall.

Positivity Piñata’s narrative inspired a collection of shared stories from across the web that is now featured on Hamilton’s website. The short animation tells the story of two children in New York who are saddened by the pandemic news. The Positivity Piñata then comes along and shows them all the small acts of kindness happening throughout the city. The story ends with the two children creating signs of encouragement to hang in their window. It’s a lesson in how each of us has something we can share to make the world brighter during dark times.

Potato Family features a young potato who dreams of being a designer. His unusual artistic tastes cause his family some concern. As they attempt to discourage his self-expression, he only becomes more determined, eventually choosing to pursue a successful career in fashion. Potato Family was also selected as part of the Dublin International Short Film and Music Festival.

For Hamilton, these films are a creative manifestation of the message she wants to share with the world. She wants to inspire "empathy, curiosity and a desire to see the best in others."

About Lori
Lori grew up just outside of Northern California and attended UCLA, where she studied Linguistics and Modern British Drama. She studied Opera at The Juilliard School, New England Conservatory and Mannes College of Music. After singing with the Boston Symphony and the Atlanta Opera, she went on to do comedy, writing and performing. Lori has written and produced over 150 short films and created and performed four one-woman shows, including a much-lauded tour with the National New Play Festival in the United States. Her talents have earned her over 40 awards for creative and writing excellence, including 5 Best of Shows. Although they take credit for providing her with constant, much-needed supervision, her cats did not help at all. To see more of her work, visit TheLoriHamilton.com.