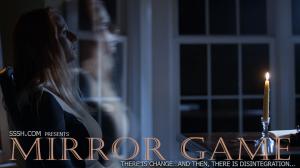 Brought to you by Sssh.com

It’s a huge honor to win a Best Director award at IndieX and I’m equally delighted to have the outstanding work by June Ann, Rob Gadling, Roland Moralis and everyone who contributed recognized”
— Angie Rowntree, Director of Mirror Game

“It’s a huge honor to win a Best Director award at IndieX and I’m equally delighted to have the outstanding work by June Ann, Rob Gadling, Roland Moralis and everyone who contributed to the design elements recognized, as well,” Rowntree said. “We all worked extremely hard to bring this story to life and it’s just affirming and rewarding to have that work acknowledged and received so well.”

June Ann said it was “deeply gratifying” to receive the award for Best Acting Duo, adding that she knew she and Gadling had “created something special” with their on-screen chemistry.

“Getting to bring the character of Giselle to life was truly a gift,” June Ann said. “I’m so honored to be awarded best acting duo! To be acknowledged for not only your own performance but also your interaction with your co-star really speaks to the easy chemistry we enjoyed. Giselle is such a complex character, with shifting emotions and huge swings in her personality and behavior, and Rob did a fantastic job playing the role of a husband who is simultaneously intrigued, concerned, aroused and befuddled by his wife’s suddenly mercurial nature”.

Mirror Game Screenwriter Sarah Valmont added, “When Angie approached me about creating a script with supernatural elements, it seemed natural to explore the ways in which terror and arousal are mirror opposites of each other that somehow still exist on the same “emotional plane.” The most precious thing that people all too often willingly give away or forsake is themselves–so I wanted to hone in on that tension between Giselle’s unhappiness and complacency, and then the devastating way in which she tries to break free–only to be lost to an opportunistic sinister force that unravels her inhibitions before taking over her entirely.

IndieX Film Festival is an LA-based international film festival that typically includes bimonthly live screenings and Q&A with filmmakers at the Raleigh Studios in Hollywood, California, but the event’s in-person screenings are currently on hold due to the COVID-19 pandemic. The festival has said that screenings will be held again once health and safety conditions permit.

IndieX accepts films from 22 countries around the globe. All genres are accepted, but the festival requires that entries “contain some fantastic elements or challenge the boundaries somehow.” Films submitted are judged by a team of invited experts from academia and the film industry from the Los Angeles area, who evaluate entries against a high standard of merit. Around a third of entries make it as far as becoming official selections and less than a quarter receive nominations.

Mirror Game has been submitted for consideration at several other festivals as well, and was recently named an official selection at both the Indie Short Fest and the Hollywood Blood Horror Festival.

You may enjoy the SFW Trailer of Mirror Game here https://sssh.com/mirror_trailer_sfw/