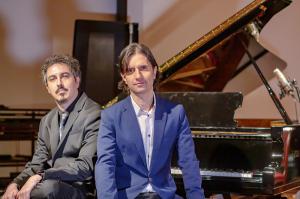 Composers Charbonnier and Le San, founders of New Music of the Americas

From their quest for beauty and the sacred, Ensemble New Romanticism sends New Music of the Americas to the world. The pan American chamber music revivalists Ensemble New Romanticism have released New Music of the Americas, the first in a proposed series of albums to bring to life the beauty and profundity of the neo-classical and neo-romantic traditions of South American composers.

Led by its founders, Mauricio Chabonnier, and Leonardo Le San presents the New Music of the Americas project. The album shares with us a repertoire of chamber and vocal works created by renowned Argentine masters Alberto Ginastera, Carlos Guastavino, and Astor Piazzolla, as well as new compositions from Chabonnier and Le San.

Le San, a Colombian by way of Philadelphia, has performed and had his works presented in venues from Carnegie Hall to the White House, to the Palais Ehrbar Hall in Vienna, and theaters throughout Colombia and Argentina. On New Music of the Americas, Le San fuses his classical grounding, recalling Schubert and Prokofiev, with his love of South American traditions and North American jazz in “Tango Impromptu No.1” and “Tango Impromptu No.2.” In “Blessed are the Poor,” a composition dedicated to our world’s refugees and carried brilliantly by soprano Macarena Urg, Le San cuts yet closer to the bone of New Music of the Americas: the timeless and thus sacred clarity awaiting us in the melodies of the romantic, classical traditions.

Le San has found his kin in Charbonnier, who explains, “Beauty and the sacred are the constitutional elements of my work.”

Charbonnier, who founded Ensemble New Romanticism in Buenos Aires in 2011 , has premiered his chamber, orchestral, and symphonic choral works across Europe, and South America. His abiding love for musical lyricism and great forms manifest in New Music of the Americas in his compositions “Nocturno Los Pajaros Negros” and “Canciones sagradas: Salvanos, Oh Senor” and “Canciones sagradas: Luz eterna.” Through these pieces and their unadorned search for beauty and the sacred, we reminded us that such concerns have not only created our greatest music …

“They are,” Chabonnier says, “essential elements to the development of the human soul.”