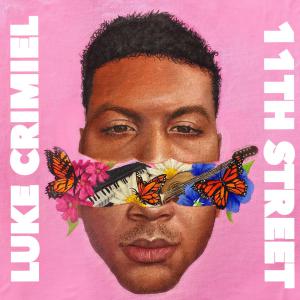 11th Street is inspired by the street Luke grew up on in Louisiana. Each song tells a part of the story of his journey to becoming an artist.

From growing up seeing his mom become a victim domestic abuse, to leaving the church, and being homeless in Los Angeles. He’s definitely gone through adversity and the album, 11th Street, serves as a therapeutic way to share Luke’s life stories.

Luke wants his music to resonate with people. He says, “whether it’s dancing, singing, or crying. I want to bring people joy, hope, and love. All these songs have a place in my heart and I am so excited to share them!”

Luke’s musical craft has a unique, old-school feel with a twist of pop. His most recent project has created a soulful sound with a fashion-forward sense and he enjoys creating glitz and glamour to his new strategy of music.

11th Street will be available on November 11th on all major platforms. Visit Luke Crimiel’s website or Facebook page for more information.

Luke Crimiel is a singer-songwriter and multi-instrumentalist who is from New Orleans, Louisiana. His interest in music started at the age of 4, as he learned to play drums and sing on stage at his godfather’s church. Luke also has a long history in music theater, leading countless plays and musicals, in which he was able to show off his powerhouse vocals. He has developed new vocal ranges and melodic structures and implemented these into his new upcoming projects today. Luke gets his inspirations from artists like Prince, Stevie Wonder, and Frank Sinatra.