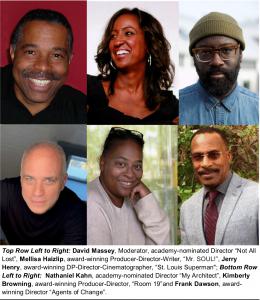 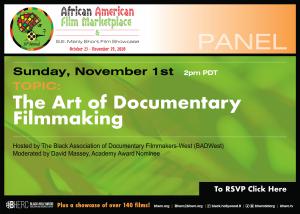 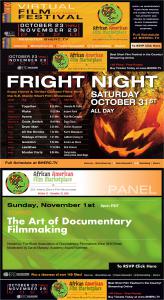 All aspects of documentary filmmaking explored in virtual panel by award-winning & academy nominated filmmakers including genre, acquisition of footage & more.

Mr. Massey has a Bachelor of Arts degree in Communications & Education from Ohio Dominican College and a Master of Fine Arts degree in advanced film & television studies from the American Film Institute. His 1992 film, "Last Breeze of Summer", was nominated for an Academy Award making Massey the first African-American to be nominated in the Live-Action Short Film category. Massey has been the recipient of several prestigious awards. The Martin Ritt Scholarship, Eastman Kodak Second Century Honoree, inductee at The Black Filmmakers Hall of Fame, The National Education Association for the "Advancement of Learning through Broadcasting", Heartland Film Festival's Crystal Heart and is a voting member of the Academy of Motion Picture Arts and Sciences. His recent documentary “Not All Lost” a PBS Black History feature shares exhilarating stories of Black youth thriving and becoming successful despite difficult circumstances.

About the 26th AAFM Festival
The Festival includes 140 films,10 panels, special events and debuts as a virtual experience this year
due to COVID – 19 on the BHERC streaming service www.BHERC.TV October 23 through November 29, 2020. Festival passes are available online at www.bherc.TV. $75.00 for a full Festival Pass, $25.00 for a Day Pass and $10.00 for a block of 5 films. All panels and special events are Free.

About the Panelists
Jerry Henry is a Los Angeles-based cinematographer who received his MFA degree from UCLA's prestigious Production Program with an emphasis on Documentary and Cinematography. His award-winning short documentary "I Promise Africa" premiered in over 100 film festivals around the world and won many prestigious awards. Jerry’s visual talents can be seen in the Oscar nominated documentaries such as "Exit Through The Gift Shop" a Peabody Award winning documentary "American Revolutionary", The Grammy Award winning HBO doc series titled The Defiant Ones which chronicles the life and work of Dr. Dre. and Jimmy Iovine, “The Rachel Divide” that premiered at the 2018 Tribeca Film Festival and is currently streaming on Netflix and his current Netflix 4-part doc series titled "High on the Hog,” directed by Academy Award winning Director Roger Ross Williams which is set for release in 2021.

Kimberley Browning is a film festival professional and filmmaker based in Los Angeles who began her career working in production at Disney's Touchstone Television. Her recent feature film producing credits include “UPROOTED: The Journey of Jazz Dance which recent won Best Musical Documentary at Flickers Rhode Island Film Festival, and Audience Award for Best Film at the San Francisco Dance Film Festival, Executive Producer of “EARBUDS: A Podcasting Documentary”, featuring standup comics Mark Marin, Aisha Tyler, Chris Hardwick and is currently streaming on Amazon Prime and Apple TV and current production of the upcoming documentary “Acting Like Nothing is Wrong”. She is the Founder/Festival Director of Hollywood Shorts, currently in its 22nd season.

Melissa Haizlip is an award-winning filmmaker based in New York. Her work responds to pressing social issues at the intersection of racial justice, social justice, activism, and representation. Music, female transformation, and empowerment are at the core of all her ideas, with the goal being to advocate and amplify the voices of women and people of color. Melissa’s feature documentary, Mr. SOUL! has been awarded a finalist for the 2019 inaugural Library of Congress Lavine / Ken Burns Prize for Film. The film won Best Music Documentary at the 2018 International Documentary Association Awards. Mr. SOUL! has been nominated for five Critic’s Choice Awards (2021), including Best Documentary Feature.

Frank Dawson is a Producer-writer, and founding partner in NuHouse Media Group, and the Co-Producer/Director of the documentary film, “Agents of Change”. As a Primetime TV Executive at CBS, Frank later coordinated the development of series scripts and production of television series including, "Private Benjamin", “Alice”, "Magnum, P.I”, and "Cagney and Lacey". He served as Director of Comedy at Universal served as Director of Comedy Development, where he was involved in the production of "Charles In Charge" (CBS) and "Domestic Life" (CBS), as Director of Programming, on the NBC dramatic series, "Miami Vice", while also spearheading the creation and launching of the ABC network comedy series, "He’s The Mayor",