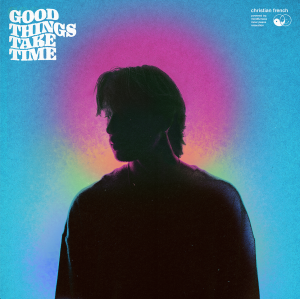 About the EP, Christian shares, “good things take time is about the trial and error of figuring life out and finding what works best for yourself. The project encompasses both my personal life and life as a musician. I’ve realized life is going to throw you curveballs, and there’s no way to know what’s coming or how to perfectly deal with things. All you can do is your best in every situation and approach challenges optimistically. Be patient. What you’re going through will help you continuously grow and become a better version of yourself. That’s what life is about.”

The upbeat title track “good things take time” mixes French’s smooth vocals with buoyant production and sets a hopeful tone for the EP. The soulful, self-aware anthem showcases Christian’s optimism and patience while on his journey of personal growth and self-love and acceptance.

Already, tracks from the EP—such as “i think too much,” “time of our lives,” “crowded room,” “make or break up” and “paper thin”— have cumulatively tallied millions of streams and counting and has received praise from TIME Magazine, Billboard, Ones To Watch, BELLO Mag, American Songwriter, and CelebMix.

Elsewhere on the seven-track set, “wake up” pairs a lush soundscape with French’s trademark velvety vocals and optimism. A timely reminder of the world we live in, he advises listeners to look within, encourage each other, and course-correct, because “we’ve been sleeping but alarms are going off, so it’s time to wake up.”

About CHRISTIAN FRENCH:
Two years ago, hockey lover and Fisher, Indiana native Christian French put his pre-med textbooks on the shelf forever to follow his true passion: using his music to share his unique perspective on life. Today, Christian has become one of America’s fastest-rising indie-pop princes. Starting out with covers on SoundCloud—emulating his favorite artists John Mayer, Gavin DeGraw, and Adam Levine—Christian eventually dropped out of Indiana University and migrated to Los Angeles to pursue his dream. It was there in 2018, while sleeping on friends’ couches, that he penned his first single, “love ride,” which has amassed over 19 million streams globally and helped him build a rabid fanbase, setting the tone for his bright future. Just a year later, Christian joined friend and fellow pop artist Chelsea Cutler on a nationwide, sold-out North American tour followed by another, even bigger tour with Quinn XCII. By the end of 2018, Christian spent all his savings on recording and releasing his independent debut EP, “natural colors,” which has amassed over 25 million streams to date. In 2019, Christian signed to Disruptor Records/Sony Music and released his “bright side of the moon” EP which features the biggest hit of his career, “head first,” which he followed by embarking on his debut headlining tour. With rock scope, pop palatability, and lyrical vulnerability his most recent singles “i think too much,” “time of our lives,” and “crowded room” showcase the nuances of his singular style and encompass pivotal thoughts about his ascendant journey thus far.