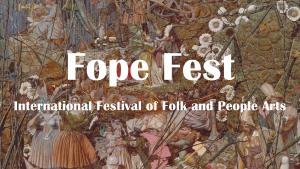 FoPe Fest aims to promote cultures, traditions and people customs through arts featuring a selection of works from 24 countries.

Sections include MUSIC & DANCE, LITERATURE, MOVIE and VISUAL ART.
The daily programme will start at 4pm (BST) for about 3 hour streaming divided into three parts and featuring works from all sections. Streaming will be accessible Worldwide and live on the FoPe Fest website: https://fopefest.eventscommunications.com

The schedule, the online catalogue and Author’s question forms will be available in the Festival website
On September 26th and 27th, the full programme will be available for on-demand viewing on FoPe Fest YouTube channel (https://www.youtube.com/FoPeFest) and website.

The Selection
3 days, 4 `sections and 42 works.
24 performances, 13 movies and 5 artworks.
MUSIC & DANCE (live music, live dance, music video)
Africa Stars Folklore and Dance Theatre from Ghana. The group was founded in 2018 yet has touched so many souls since then.

Ballet Folclórico Huitzilli Mitotiani from Mexico presenting a fragment of the biggest party for Oaxacans, the Guelaguetza, an annual indigenous cultural event.
Ballet Folclórico Municipal Rancagua from Chile, from the municipality of Rancagua and representing Rancagua and the sixth district Libertador Bernardo O’Higgings.
Ballet Folklorico Aztlan, based in Canada with the mission to create, present, preserve, and extend the great repertoire of Mexican Folklore dancing.
Ballet Internacional de Santa Cruz from Argentina, a federal project aiming to perfect and gather young dancers from different cities.

Niamh Finan and Meabh Kennedy from England adding something special to the song ˜Please, Please, Please, Let Me Get What I Want” by The Smiths.
Who Creations from Canada presenting King Arthur, a "dramatick opera" or semi-opera where the principal characters do not sing and are played by dancers.
LITERATURE (poetry, graphic novel, fiction)
Jasmin Stone from Israel presenting a music poetry video based on the poem "The children's tree" by Maya Bajerano
Svend-Erik Engh and Neil Sutcliffe from Scotland sharing a story inspired by the Viking’s arrival in Scotland.
MOVIE (short, documentary, feature)
“Avatara” by Nadav Harel (India – documentary – 2020). Set in the cultural frontier zone of the Hindu Himalaya, explores the lived religion of goddess worship (shaktism) in a remote pastoral valley.
“In search” of by Daniel Asadi Faezi and Sadam Badshah (Pakistan – short – 2017). It explores the reasons and consequences of the progressive disappearing of the Pashtun culture.
“Kalapa” by Sophie Stallegger (Austria – documentary – 2018). One day in the learning community Kalapa in Colombia, where the concept of a school is thought in a different way.
“Kub ban (A Long Way Home)” by Xaisongkham Induangchanthy (Laos – short – 2017). It tells about a Lao American young man bringing his father’s ashes to Laos to fulfil his last wish – to return home.
“Memories of Little Jerusalem in Sefrou” by Irena Paskali (Germany – documentary – 2020). It explores what’s left of the city’s once very lively Jewish culture and its quarters, the Mellah.
“Taming Winter. A story of Carnivals and Bears” by Andrea Arena (Italy – documentary – 2018). European winter is full of carnivals but if you leave the cities and go through the remotest valleys, in the small villages clung to the slope of the mountains, you can find celebrations that differ from the Carnival we all know.
“Tara's footprint” by Georgina Barreiro (Argentina – documentary – 2018). Through the eyes of young generation, it explores the ancestral tradition and the spirituality of the Bhutia people.
“The Church” by Andrey Gryazev (Russia – documentary – 2020). Believers are filmed during Orthodox Christian holidays, which repeat the earthly path of Christ – Christmas, Baptism, Resurrection, Transfiguration and Ascension.
“The King – Naat Veliov and the Romany music from the Balkans” by Michele Gurriere (France – documentary – 2019). King Naat Veliov, the king of the gypsy trumpet, is a composer from a famous kin of Balkan Roma musicians.
“The Open Door” by Jamyang Jamtsho Wangchuk (Bhutan/UK – short – 2018). It was an age-old custom in the Himalayan Kingdom of Bhutan to have the doors open, only closing it before bed.
“The Santiago Diaries” by Peter Klausz (Spain – documentary – 2010). Each year thousands of people walk the Camino de Santiago in Spain.
“To Raise a King” by Anthony Sileo (USA – short – 2017). Sometimes a parent’s destiny is to raise their child to fulfil theirs
“Wild Honey” by Ava Porter and Farhad Akhmetov (Russia/USA – documentary – 2019). A rapturous ethnographic look at traditional folk music, presents the ethnic communities of five regions across Russia
VISUAL ART (photography, painting, digital art)
“Fairy tales and legends” by Claudia Gruenig from Germany – photography
“Original hebrew calligraphy poems” by Ilanit Scharff Vigodsky from Israel – painting
"Marissa: the little fairy” and “Unicorn" by Morgan from USA – digital art and painting
“Fringe Deamon” by Melissanthi Spei from Greece – digital art

FoPe Fest is an independent production by events.com(munications) Ltd (www.eventscommunications.com).