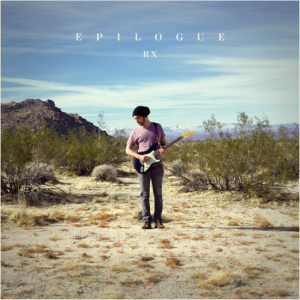 “Epilogue” is a blend of indie-pop and rock, the sounds inspired by artists such as John Mayer and Derek & The Dominoes. “Epilogue” served as closure from a long term break up which ended suddenly in early 2019. The pain of the loss had a profound impact on his life and writing. Written in the span of two months and recorded within just three weeks, the album is a culmination of RX’s 15 years of experience in songwriting and collaborating with other talented artists. The album holds songs filled with lyrical depth and vulnerability.

“I prefer listening to artists that tell me something personal,” RX says. “That's the only way I'm going to believe you’re being authentic.”

Since the COVID-19 pandemic disrupted the lives of many musicians in RX’s hometown of Seattle, WA, RX has been supporting local artists through his popular livestream show, “Work From Home.” The show, recorded from RX’s garage in a setup following social distancing measures, allows local artists to perform and receive tips from viewers online. In solidarity with the Black Lives Matter protests, RX has also used his platform on “Work From Home” to highlight local Black artists such as Marshall Law Band and TezaTalks.

RX is a successful artist based in Seattle, Washington. He is best known for his rare, compelling voice and his guitar playing on both acoustic and electric. RX has spent his life playing in bars and wineries; and for a short time lived in LA to collaborate, write, and meet with several agencies/labels. His influences include Eric Clapton, John Mayer, and James Bay. RX has performed at several notable venues, including singing the national anthem at two NFL games, and has toured with acts such as Train, Andy Grammer, and Michael Franti.