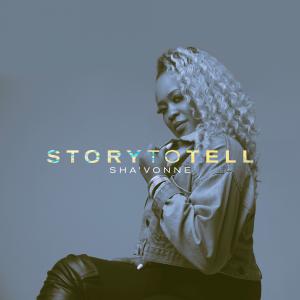 At a time with so much unrest and uncertainty, "Story to Tell" deals with the need to break down walls, open our hearts and listen despite our differences.

This is the time to tell my story, in hopes of provoking change and encouraging others to prepare for their own comeback.”
— SHA'VONNE

NASHVILLE, TN, USA, August 7, 2020 /EINPresswire.com/ — Keynote Artists Management’s SHA’VONNE has released her debut single, “Story to Tell” — an impassioned pop anthem that implores us to break down walls that divide us and take the time to hear and consider each other’s stories and experiences. At a time with so much unrest and uncertainty, SHA’VONNE’s simple message is the reminder we all need to hear.

From a young age, SHA’VONNE was heavily influenced by Michael Jackson's amazing ability to not only mesmerize audiences, but his heart to inspire change. Born and raised in Texas, she began singing gospel music with her first solo at the tender age of seven, and she soon found her groove and began singing in her very own band. She began to add to her musical flavor by introducing herself to the rock music genre with songs from Coldplay, Mutemath and John Mayer among others, and quickly found herself opening for and performing with acclaimed artists such as Rose Royce, Mary Jane Girls, Color Me Badd, The Chi-Lites, Peaches & Herb, James Ingram, Peabo Bryson, En Vogue, Oleta Adams, Jeffrey Osbourne, Taylor Hicks, Israel Houghton, Planet Shakers, Jonathan Butler, Darlene Zschech, Hillsong United and many others. Her talent and ambition eventually led her to begin focusing on a project of her own.

SHA’VONNE wrote her first few songs in Nashville, Tennessee with some of the Music Industry's top songwriters, whose co-writers’ credits include the likes of Carrie Underwood, Kari Jobe, Lauren Daigle, TobyMac, Mandisa, Audio Adrenaline, The Newsboys and others. Her co-writers all gave a collective sigh of relief and amazement at the amount of honesty and transparency she was willing to give in each song. She embraced her own story and shared of the redemption found in finding the strength to overcome heartache, abuse, turmoil, and devastation while being a single mother.

"God brought me back from the brink, and provided a path to this opportunity,” says SHA’VONNE. “This is the time to tell my story, in hopes of provoking change and encouraging others to prepare for their own comeback. I hope that others will find the courage to tell their own stories. We all have a story to tell.”