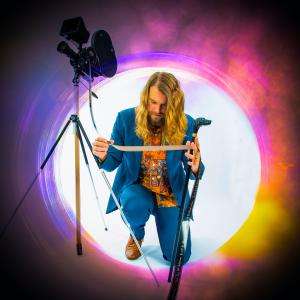 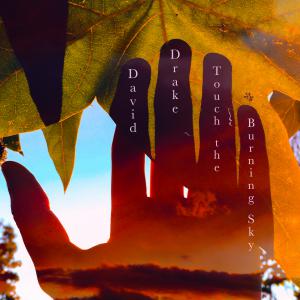 Shot in black and white, the video, the scruffy man at one with nature, and the acoustic cutaway resonator he strums are bound to no specific era.

“Man against nature” is a common theme in art, literature and music. The drama, the heart, the relatability lies in the conflict. With a title like "Touch The Burning Sky," you’d be forgiven for thinking that David Drake’s latest is a warning, or a dare even. Rather it’s simply a picture painted in awe of the natural world, and it’s got just as much soul and spirit as any rivalry committed to canvas or lyric sheet. Though strictly a musician, Drake’s an artist in every sense, approaching his songs as if they were paintings. His poetic imagery and lyrical landscapes take the listener on a journey out of the moment, out of their world, and into the imagination. He’s got a knack for smart hooks learned from legends like Pink Floyd and The Beatles, but hews closer to more modern-day classicists like Jason Falkner, Jakob Dylan, even fellow Detroit troubadour Rodriguez. Following the stand-alone single "Shooting Arrows", "Touch The Burning Sky" is the first single off his upcoming Imaginary Movies, and it’s hard not to get pulled into the world Drake brings to life in just four short minutes.

It’s easy to hear Drake’s lifetime of immersion in Classic Rock, thanks to his radio DJ Dad, and the combined months he’s spent on the road hitting club after club. Written and produced with award-winning composer, producer, sound designer and engineer Mike Wolpe, "Touch The Burning Sky" is a serene, longing gaze deep into the unknowable power of nature. And our place within it — do our little human dramas matter when set against such awesome, immeasurable beauty? "Touch The Burning Sky" seems to think so. Drake paints striking, side-by-side sketches of both life and Life. The track’s got Radiohead’s sweeping sense of melody and mood, without the glitchy, unsettling technophobia. Its bluesy groove, acoustic guitar and keys move with the confidence, effortlessness and profundity of the Sun traversing the heavens set alight.

Director Adam Petrishin worked the same escapist magic he did for Drake’s last video, "Shooting Arrows at the Sun," but the energy couldn’t be more different. The two trade the fractious tension of “Arrows” for the stillness and beauty of California’s coastal forests. Drake sets out alone across a mammoth lake, his camera his only companion as he rows the glassy surface. Shot in black and white, the video, the scruffy man in it, and the acoustic cutaway resonator he strums are bound to no specific era. He is any man from any time, because the love story he’s telling is as old as the first human to clap eyes on such wonders. He speaks as someone who has found a oneness with the natural world, but is still apart from it until he throws himself from the canoe, no land in sight. The video flips without warning to full color as he treads the inky waters, and we pull back, further and further still, hoping he makes it to shore, but knowing that right now, he’s right where he needs to be.