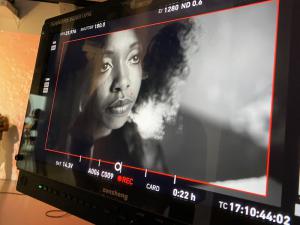 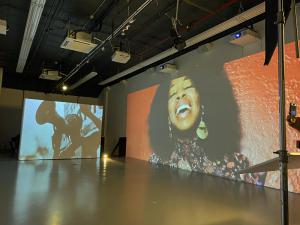 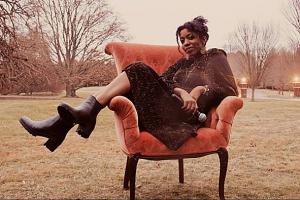 In May, inspired by the tragic police killing of George Floyd in Minneapolis and the subsequent Black Lives Matter protests, Devin Marie wrote, performed, and posted a new song, “I Can’t Breathe,” on social media. Within a few weeks her heartfelt performance went viral on social media, having garnered almost 900,000 views. View it here on YouTube.

Her shining star rose even further last week when the strong response to Devin Marie and her song attracted the attention of New York based WHTWRKS Inc., marketing and branding strategy agency, who recognized her talent and the powerful message of the song. The timing was perfect—they were producing a Doritos commercial to highlight the brand’s commitment to social justice, and they understood that Devin Marie was deserving of the national exposure the ad would bring. They invited her to be a part of the commercial, which was broadcast during the BET Awards on BET, simulcast on CBS and other ViacomCBS networks, June 28. The commercial can be viewed here.

Devin Marie fans can download the full version of “I Can’t Breathe” online. Consistent with Devin Marie’s commitment to social justice, all proceeds from the song will go to organizations who further that goal.

Who is Devin Marie?
Millions of BET Awards viewers may be wondering, who is this singer-songwriter? While still relatively unknown to music industry execs—and that will surely change—Devin Marie, a Long Islander who recently completed her degree in media studies and music production at Queens College, has been quite busy, touring with a popular Christian Rock/Pop band Pursuing JC, an eight-member Christian rock band, known for its astonishing performances—their talent and professionalism is well beyond what one would expect at such a young age. The band also includes her brother, singer-songwriter Jordan Simpson.

She wrote, arranged, and performed the song “I Can’t Breathe” in May 2020, inspired by the tragic death of George Floyd in Minneapolis. After the incident, she read many news articles about what happened and learned who George was as a person. “Then I sat down across the dinner table from my brother who is the most gentle, kind-hearted soul you will ever meet,” she said. “I can’t help but see my brother when I watch the news. After dinner I started pouring my feelings onto paper and let the melody grow into a song. I just needed to release some emotion and it turned into something beautiful.”

Devin Marie is passionate about writing music and hopes to become known, not just as a writer and performer, but also as a voice for those people who struggle to find their way through their own personal issues.

Despite her immense talent, Devin Marie has had to struggle to truly find her voice. “When I first joined Pursuing JC, I had zero self-confidence and I was very new to my faith, so I started right off the bat outside of my comfort zone,” she recalls. “Because of this, I really didn’t have a choice but to either let my fear get the best of me or learn how to channel that and bring it as positive energy into my performances. Over the years I have come to realize that I have the power to impact people so positively through music and now it’s all I want to do.”

Songwriting comes naturally to Devin Marie and she has built a catalog of many original songs, which have impressed the industry veterans with whom she has worked. One of her biggest fans is music professor and executive producer Jim McElwaine, who mentored her at Queens College and has worked with New York recording artists, Broadway theaters and touring ensembles for more than 40 years. “There is no doubt in my mind—she is a major talent,” he said. “Her voice is clear and well founded. Her lyric poetry manages to frame conflict elegantly, and her performing talents are diverse. My advice to all who listen—hold on to your hearts!”

Another fan and mentor is multiple award-winning singer-songwriter/voice teacher and artist mentor, Elza, who is extremely impressed by Devin as an artist and personality. “Devin Marie is a world class artist,” she said. “I’ve had the honor and pleasure of mentoring her and not only is she a compelling artist and the ultimate professional, but she also has a heart of gold! I feel certain she is going to go far!”

Elza’s praise should be heeded—she knows a thing or two about songwriting. She is the first place winner of the International Broadjam Songwriting Competition, the Windrift Canadian Songwriting Contest and finalist in both the John Lennon Songwriting Competition and the Billboard World Song Competition. More than 40 of her original songs have been licensed in TV and film and her song “The Other Side” was the Grand Prize Winner of the International Music Licensing Contest. Elza is in demand as a composer and performer of songs for television and film as well as a sought-after voice teacher/artist mentor.

Devin Marie hopes her “I Can’t Breathe” song facilitates conversations and reflections. “I hope it brings people together, despite how divided we may be, because nothing unites people like music does. I hope it educates people on the reality of our world and that it shows young people that our voices are so powerful—and we need to use them.”

To learn more about Devin Marie and listen to her latest songs, please visit her website. To arrange for bookings and appearances, please contact Executive Producer Jim McElwaine.

Editor’s note: To arrange for media interviews and appearances, please contact Kurman Communications, Inc. by telephone at (312) 543-3928 or via email.