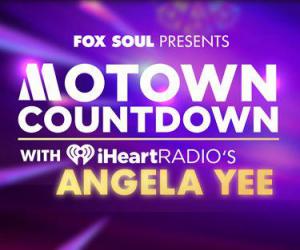 James DuBose, Head of Programming for FOX Soul stated, “As we continue to grow Fox Soul into the premier destination for black culture content, being able to partner with iHeart and Motown to bring this series to the community is the definition of black excellence and I couldn’t be more excited.”

Each 30 minute episode will contain one countdown of the “top 5 current torchbearers” in a specific category. The series premiere will focus on Hip Hop’s best. The second installment will highlight the most impactful songs to encourage change and revolution. The third will discuss Andre Harrell-inspired hits, and the final will consider Motown songs throughout the decades. Notable producers and artists will join host Angela Yee to engage in passionate debates about music.

“I’m excited to bring this new series to our listeners and talk and debate with top artists and industry icons about these leading music genres during this countdown – from today’s Hip Hop to inspiring Motown Hits that have influenced the music scene throughout many decades,” said Angela Yee.

“Motown Records is honored to partner with Fox Soul and iHeartRadio for the launch of ‘Motown Countdown with iHeartRadio’s Angela Yee.’ The history of Motown has always been to push the culture and be the voice of Young America,” said Motown GM Marc Byers.”

The program will be Executive Produced in a joint effort by FOX Soul’s James DuBose, Motown Records’ Marc Byers and iHeartMedia’s Thea Mitchem.

FOX SOUL (foxsoul.tv) is a live, interactive, and advertisement-supported OTT streaming channel, positioned for the African American viewer, and the first OTT offering by FOX Television Stations. FOX SOUL’s lineup combines the live, interactive, original programming of “The Black Report,” “The Book of Sean with Dr. Sean McMillan,” “The Mike and Donny Show,” “The Tammi Mac Late Show,” “Out Loud with Claudia Jordan,” “Chatter” hosted by Holly Carter, “Cocktails with the Queens” featuring Vivica A. Fox, Lisa Raye, Syleena Johnson and Claudia Jordan, “Quarantine Cookoff with Rickey Smiley” and “One on One with Keyshia Cole,” with the locally produced FOX TV shows that are directly connected to the urban community, including “The Q,” “The Isiah Factor: Uncensored” and “Street Soldiers with Lisa Evers.” FOX SOUL also airs FOX first run syndicated shows “Dish Nation,” “The Real,” and “Divorce Court.” FOX Soul’s original programming is available weeknights from 4:30 p.m. PT through 10 p.m. PT, and is available at FOXSoul.TV, the FOX Soul app, Fire TV, Roku, Apple TV, and on YouTube.

There simply isn’t a name in music more synonymous with era-defining hits, star-making and innovation than Motown. The Motown of today doesn’t just influence, it draws influences from the vibrant, multi-hued energy driving the global youth movement from Atlanta to London. This ain’t your grandfather’s Motown, but it’s still the sound of the world’s premier artists, driving the culture forward. And in 2020, that sound is louder and bigger than ever.

From the top down, the label understands how this unique world moves. The ATL’s explosive music scene is where Motown President and Executive Vice President of Capitol Music Group Ethiopia Habtemariam cut her teeth. She brought Atlanta-based Quality Control Music, founded by Kevin “Coach” Lee and Pierre “Pee” Thomas, into the Motown fold with a joint venture deal. Together, the labels have released Migos’ chart-topping, multi-Platinum Culture II, and introduced newer acts like Lil Baby, City Girls and Lil Yachty. Nigerian-born artist/ philanthropist/entrepreneur Tiwa Savage – widely regarded as the Queen of Afrobeats – joined the Motown family in 2019, which also includes such renowned artists as Erykah Badu, KEM and NE-YO.

Started in 1959 with a dream and an $800 loan, Berry Gordy’s Detroit-based Hitsville USA became a cultural behemoth that swiftly hooked pop culture with a brand new beat. The unmistakable, irrepressible sound of young America didn’t just dominate the charts – it crossed the racial divide during the social upheaval of the 1960s and 1970s with artists like The Supremes, Marvin Gaye, Smokey Robinson & The Miracles, The Marvelettes, The Temptations, Stevie Wonder and The Jackson 5. The label also explored the political and social via black forum releases from Dr. Martin Luther King Jr. and Stokely Carmichael.

In 1972, Motown officially moved its headquarters to Los Angeles. Its newly-formed production company began releasing hit films, including a trio starring Diana Ross – Lady Sings the Blues, Mahogany and The Wiz. In the decades that followed, The Commodores (and later, lead singer Lionel Richie), Rick James, DeBarge and Boyz II Men gave new generations timeless hits to remember. Now, more than 60 years since its inception, Motown remains committed to setting the agenda rather than following the trends.

iHeartMedia (NASDAQ: IHRT) is the number one audio company in the United States, reaching nine out of 10 Americans every month – and with its quarter of a billion monthly listeners, has a greater reach than any other media company in the U.S. The company’s leadership position in audio extends across multiple platforms, including more than 850 live broadcast stations in over 160 markets nationwide; through its iHeartRadio digital service available across more than 250 platforms and 2,000 devices; through its influencers; social; branded iconic live music events; other digital products and newsletters; and podcasts as the #1 commercial podcast publisher. iHeartMedia also leads the audio industry in analytics, targeting and attribution for its marketing partners with its SmartAudio product, using data from its massive consumer base. Visit iHeartMedia.com for more company information.