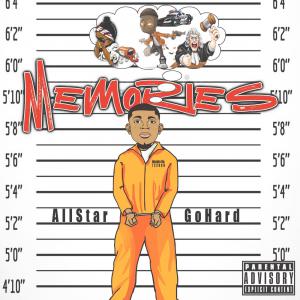 Turning to rap after returning from prison Allstar GoHard is a gifted rap artist working towards putting himself and his city on the map, his soon-to-be-released single “Memories” is a huge step.”
— Daily Mail

OKLAHOMA CITY, OKLAHOMA, UNITED STATES, May 19, 2020 /EINPresswire.com/ — It’s no secret the most “real” music writers and performers come from harsh environments and trouble backgrounds. Not only does this help motivate success but it also opens up a window to look at the world they come from in their music. This dynamic is part of what makes rap what it is. In that spirit, Oklahoma City is delivering AllStar GoHard, a rap MC on the rise. Home from prison for less than a year after a robbery saw a cohort turn him in to the police, AllStar GoHard is now pouring his experiences into his music, while striving to stay problem free. The rap performer recently announced his new single “ Memories ” is due out soon building up interest in his coming album. The song depicts his past troubled childhood involving, robberies, police encounters, and other negative aspects of urban life. All together AllStar GoHard was in prison for close to three years and is now putting true street Oklahoma City rap music on the street. For those who think OKC is also about cows and country western the new star is showcasing this is far from the truth.

“I am putting my energy into telling my and my neighborhood’s story,” commented AllStar GoHard (whose real name is Quashawn Wilson). “The rap music scene here is something basically non-existent so I am doing my best to help create it. ‘Memories’ is a song that comes from the heart.

The lyrics to “Memories” make it clear that the artist may be focused on music now but he still keeps the street code, which includes not cooperating with law enforcement or backing down from street beef, if he must. This translates into raw, high-energy, compelling music that is what OKC likely needs to get it on the map.

The excitement surrounding AllStar GoHard is high and rising.

Chris S., from Oklahoma, recently said in a five-star review, “I was lucky enough to hear ‘Memories’ prior to its release and it is really exciting. OKC has needed a rap star to represent us and now we have AllStar GoHard. Our city is a real one and AllStar GoHard keeps it real.”