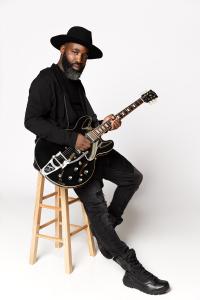 The track and video for “Can’t Stop Thinking Bout You” feel like an epic journey beyond this world, and all of its hangups and heartaches. And no wonder, because the man behind it all, Sanya N’Kanta, has traveled an interesting musical path to finally arrive at his latest record, The Counterfeit Revival. Born in Kingston, Jamaica, Sanya’s father was heavy into reggae, which made its way into the artistic DNA of the future artist/producer. But it was a middle school buddy who turned him onto classic rock, specifically the genre-defining riffage of Aerosmith’s Joe Perry, that got Sanya to become a music maker. From there, he picked up on 80s synth-pop, late 90s/early 00s hip-hop, and modern soul/alternative. Less obviously, indie rock house shows in the Midwest were where he first began developing his craft in front of demanding, yet supportive, crowds. As a solo artist, getting one genre right is tough enough. Sanya N’Kanta manages to meld quite a few far-flung styles into something all his own, and his first single, “Can’t Stop Thinking Bout You,” is a testament to that talent.

“Can’t Stop Thinking Bout You” unfolds like an extended mantra, rippling out from the center with a subtle, galloping, clubby rhythm. Sanya’s primal, recurrent lyrics immediately speak to anyone who has ever fallen in love, to anyone who’s world revolves around another. The distorted guitar line’s looped minimalism is a spacy holdover from his college days, where he caught underground guitar sound legends like Hum and Poster Children. It’s a pulsing, cosmic head trip that washes over the listener. He sings with humbled emotion and awe, as if he were the first astronaut to hurtle through, and gaze upon, vast uncharted galaxies – and this fusion of soul, alternative, synth-pop, and house music is as weightless and free as love itself.

An ancient stargazer looks skyward, past our Moon, past infinite clusters of light, and his telescope lands on something, that after all his years of searching, gives him pause. A beautiful vision of a woman descends earthward, a blinding point of light in her outstretched palm. The Greek Titan Asteria, maybe? She represented falling stars, nighttime divinations, but most importantly, stars that stand out among the countless celestial bodies. Sanya sings of all-encompassing love, one of the most elusive, ultra-rare revelations known to man. She joins hands with the stargazer as Sanya performs, flanked by ghostly animations that look like ancient runes in motion, like swirling star maps. “Can’t Stop Thinking Bout You” and The Counterfeit Revival are masterful introductions to a universe that Sanya N’Kanta has created all on his own.