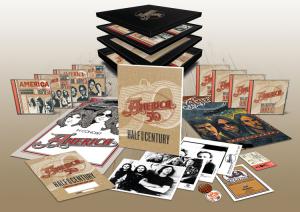 ASHEVILLE, NC, USA, April 3, 2020 /EINPresswire.com/ — The year 2020 marks the 50th Anniversary of music legends America. America Records is proud to release in early June the ultimate 8-disc Anniversary Box Set “Half Century.” Produced for release and Compiled by Jeff Larson for America Archives, Containing CD's of rare archival studio recordings consisting of alternate mixes, demos and rehearsals, including several previously unreleased tracks ranging from 1970 – 2000. Along with the re-mastered Bremen 1973 in studio performance and two CD's of Radio Interviews providing an audio overview of the band's career, along with a DVD of Super 8 “Home Movies” (1972-1975) to give fans a behind the scenes look at the early years of this enduring band.

Founding members, Gerry Beckley and Dewey Bunnell (along with former band mate Dan Peek) met in high school in London in the late 1960s and quickly harmonized their way to the top of the charts on the strength of their signature song “A Horse With No Name.” America became a global household name and paved the way with an impressive string of hits following the success of their first #1 single. Forty plus years later, these friends are still making music together, touring the world and thrilling audiences with their timeless sound.

From their formative years, America has been a band capable of transcending borders with its uplifting music and positive message. Embracing a rainbow of divergent cultures, America's audiences continue to grow, comprising a loyal legion of first, second and third generation fans, all bearing testament to the group's enduring appeal.

“I think that the ingredients of the America sound are the basic fundamentals that translate internationally,” explains Beckley. “The Italians are huge fans of dance music, but they also love a ballad – they're romantic at heart. It's the same in the Far East. A lot of times in these countries, we see people singing along, and they don't really know what the words mean. Music is truly the international language.”

Disc 1: London Demos 1970: All Previously Unreleased
Early demos from the Fall of 1970 of the trio preceding their first Warner Bros self-titled album. This set represents the most complete set to date from this era recorded between several iconic London studios of the time.

Disc 2: Bremen 1973 (Live on Air) – First Time Remastered Audio Release (Only previously available as a DVD)
An on-air live recording of the Trio from 1973, in-between the albums “Hat Trick” and “Holiday.” This recording has been remastered for the first time and includes all the un-edited studio banter.

Disc 3: The Caribou Sessions 1976 – All Previously Unreleased
Rehearsals, outtakes, and demos from February1976 for the album “Hideaway,” recorded at the famed Caribou Ranch Studios in the Rockies – Nederland, Colorado. These recordings provide a “you are there” experience as these songs were being formed on their initial takes.

Disc 4: The Poison Oak Sessions 1981: All Previously Unreleased
In 1981, between the album “Alibi” (1980) and “View From The Ground” (1982), the band recorded several songs at Dewey's home studio, Poison Oak, in Northern California. This set contains early incarnations and alternate versions of songs released on later America albums as well as unheard songs that have been in the vault until now.

Disc 5: The Alternate 90's Plus: All Previously Unreleased
Alternate mixes from the albums “Hourglass” (1994) and “Human Nature” (1998) along with unreleased songs that came before, in-between and after these official releases.

Discs 6 & 7 America on the Radio – All Previously Unreleased
Various radio interviews stemming from 1974 – 2000's which provides a narrative and unique overview to their long career.

EXCLUSIVE TO THE BOX SET!

Disc 8 – America – Home Movies (DVD)- All Previously Unreleased
“Home Movies” is all previously unreleased footage from the bands personal archive. A collection of very, “fly on the wall” footage, these films provide an amazing insight into the band, shot between 1972 and 1975, showing behind the scenes footage of, “Hat Trick at Home”, early attempts at making home making of music videos and various on the road activities. These films give the viewer an amazing view of historical events as they unfolded. To any America fan, the ultimate access all area’s time machine.
This DVD is EXCLUSIVE to this box set and will not be available beyond it.