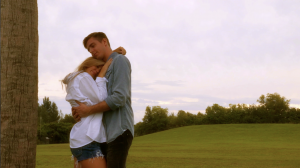 Lucas Blando – I Wish My Heart Could Paint

Serenity and beauty come together to create a gorgeous visual compliment to the heartfelt music.

From a coffee shop gig to hours and hours spent writing and perfecting his performance, Lucas Blando is a singer-songwriter sure to grab your heart. Though his music varies from song to song, he stays consistent with his sound, leaning heavily on acoustic songs. Blando cites the prolific indie singer-songwriter Josh Garrels as an influence on his metaphorically written lyrics. It's no surprise to hear that he cites John Mayer as his biggest influence on guitar: Blando, who started playing guitar after seeing Mayer live, shares Mayer's talent for telling a story and painting a picture with his songs.

"I Wish My Heart Could Paint" is the story of a man who has a lot to say and feelings he wants to show but is incapable of fully expressing. The listener can easily feel his anxiety at this internal struggle, from the opening verse to a guitar solo midway through. The lyrics were written in 1998 by Sky Cooper, who then formed a team to bring the song to life. Blando had worked on songs with Tom Alexander, who plays piano on the song; when producer Gary Benson was in search of a young male vocalist for "I Wish My Heart Could Paint," Alexander recommended Blando. After months of fine-tuning, they recorded at The Power Station, home to legendary composer/producer Charlie Calello (who was key to perfecting the stringed harmonies and coaching Blando through vocal lines). Recorded on a microphone that had been used by Frank Sinatra, it's no surprise that it turned in to a real piece of magic.

The accompanying music video for "I Wish My Heart Could Paint" brings Sky's vision to life. Starring alongside Blando is professional model and actress Brittany Paul. Inside an art studio, Blando stands at an easel, palette and paintbrush in hand, attempting to capture Paul's beauty on his canvas. Outdoor shots were filmed in a giant field in southern Florida – and though the day started with a rainstorm, you'd never guess it from this golden sunshine clip.