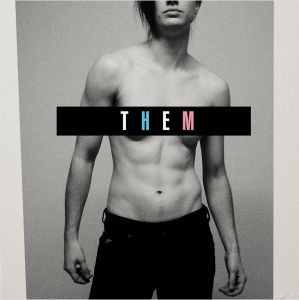 LOS ANGELES, CA, US, March 31, 2020 /EINPresswire.com/ — Emerging pop artist FLAVIA, a well-known cis, queer ally, released today an uplifting music video for her new single, "Them," in honor of International Transgender Day of Visibility. The single and music video premiered this morning through Billboard.com, and "Them" is now available on all streaming platforms.

The new FLAVIA video features a 40+ person cast of trans, gender nonconforming, and non-binary individuals who proudly represent the truth of who they are. “Ask me who I’m with, I’m with them,” FLAVIA states proudly on the track. "Them" is also a personal expression for FLAVIA, being written about an impactful romance she experienced with a partner who identified as trans-masculine non-binary. Through the relationship she realized we all have so much more to learn. As a cis, queer ally, FLAVIA is motivated to use her voice and platform to positively uplift the voices of the T in LGBTQ+ that is often underrepresented in the media. She aims to raise awareness for and shed light on the trans community through the song’s release on Transgender Day of Visibility.

FLAVIA is also set to release a three-part docuseries, titled "Them," in early April in order to raise awareness of trans issues and trans rights.

FLAVIA is an electronic singer-songwriter and producer. She grew up in Ireland, Italy, and has lived in just about every corner of the US before landing in LA. She was celebrated by Billboard on her video release for her single, ‘Til I Die’, which reached almost a million views in the first month. She also won the Grand Prize in the John Lennon Songwriting competition for her song, ‘Expectations’, and was a finalist in the Great American Song Contest. There is a tangible strength in her music, an unapologetic curiosity about life, love and sexuality. Layered over fluid and powerful beats that make you dance hips first. Eyes closed, middle finger up, smile on your face. Her live show is a high energy sonic and visual experience. FLAVIA commands an audience with her thundering spirit and powerful stage presence. “She’s an activist advocating for social issues such as LGBTQ+ equality, and creating community for other female pop artists in Los Angeles.” – Pink Things Magazine