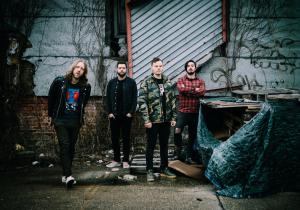 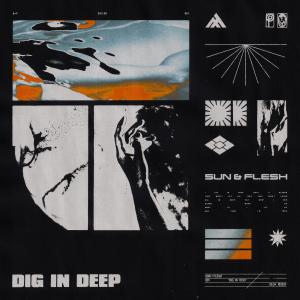 A song all about the balance of darkness and light, heavy and soft, the new Sun & Flesh, “Dig In Deep,” is worth the bitter to taste the sweetness.

Hard rock thrives on juxtaposition. It’s those sharp transitions between clean and dirty sound, heaviness and lightness, comfort and menace that makes the best rock songs sting as hard as they do. Sometimes the breaks are unexpected, and sometimes they’re a release of tension at the climax of a long and ominous build. The punches might come in a flurry – or a series of slow, powerful blows.

Sun & Flesh know how to do all of that. They understand that contrast is the very essence of heavy music. The very name of the Brooklyn-based band is an unlikely juxtaposition. Even before they began working with producer Dan Korneff (Breaking Benjamin, Paramore, Papa Roach), their music featured surprising twists and turns, and the interplay of shadows and light. Korneff has refined their approach and sharpened all the edges, and the new songs the group is making are the most explosive they’ve ever done. Korneff says, “The reason why I developed an early interest in this band is because the songs were so good. I can’t wait for people to hear what I hear.”

Take “Dig In Deep,” the band’s latest single. You’ll hear echoes of Nineties grunge, classic metal, atmospheric music, left field alternative rock, and even a little modern sludge. But what makes the song successful is the skill with which those elements have been combined. Jonathan Serwinowski’s thunderous drums, Matt Brewster’s growling bass, Stefan Reinberger’s scrawled leads, and Christoph Manuel’s anguished yet melodic vocals – all of it creates a single irresistible effect. The new track builds on the success the band has had with prior releases such as “Heaven,” which earned them a profile post on Metal Injection, and the pulverizing “I Don’t Care,” which firmly established them as a quartet with something meaningful to say. Through it all, they’ve remained fiercely independent, chasing their own style and conducting their own wonderfully fiendish experiments in sound, rhythm, and atmosphere.

Brewster and Manuel carry that intensity into their disturbing – but extremely entertaining – clip for “Dig In Deep.” Once again, this is a work built on unexpected juxtapositions, and sudden, jarring switches between alluring shots and distressing imagery. Attended by a group of attractive women, the group performs in the library of a suburban house. Yet as the music becomes louder and more furious, we’re treated to footage straight out of a horror show: insects, monsters, entrails, some creatively grotesque gore. There’s even a leering priest with milk dripping suggestively from his mouth. By the end of the clip, even the beautiful girls have morphed into something unlike what they initially seem to be – and their intentions, too, are revealed as something less than innocent.