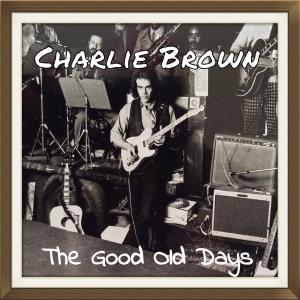 Stylistically, I recorded this in a Roots/Americana vibe which has always been a favorite.”
— Charlie Brown

LOS ANGELES, CALIFORNIA, USA, March 18, 2020 /EINPresswire.com/ — 2020 marks guitarist Charlie Brown’s 50th year in the music business. Shortly after arriving in New York at age nineteen — a green kid from rural Georgia — Charlie had the good fortune of being hired as part of Atlantic Records’ studio musician staff. He was immediately immersed in being recorded on numerous hit Atlantic artist’s releases. Soon after, he became musical director and lead guitarist for Van Morrison at the peak of his "Brown-eyed Girl" era, and toured with his band.

Charlie’s talents landed him the lead guitar spot in the most influential Broadway show of its era, "Hair," where he performed for an amazing four-year run. While in the show, Brown was signed to compose and record two albums, "Up from Georgia" and "Portrait of a Glad Man." Continued studio work — including extensive work in jingles, records, and film scores — kept him very busy during those years as well.

Over the course of his career, Charlie has played on over 1,000 recordings, the list of which reads like a who’s who of the industry. His most cherished work remains the Platinum album award which hangs on his wall for playing on Barbra Streisand’s monster hit "Song Bird" album.

Brown moved to Los Angeles in 2003 and continued doing what had always been his passion; original recordings. Since being on the west coast, he has released four original CDs. Brown’s current new release, "The Good Old Days," released on Warrior Records, is a mixture of his original compositions, along with favorites from other artists and songwriters who have inspired him over the years like Johnny Cash, Jimmie Reed, Fred Neil, among others.

“Stylistically, I recorded this in a Roots/Americana vibe, which has always been a favorite,” notes Charlie. “I hope everyone enjoys it!”