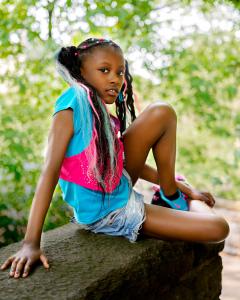 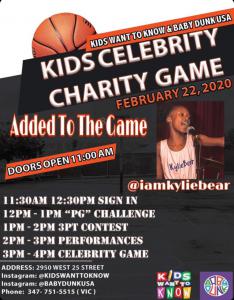 Sponsored by KidsWanttoKnow and BabyDunkUSA, the " Rise Above Cancer " charity event will host live music, performances and games throughout the day

She was born to perform. She sings, she dances, she raps. It's unreal.”
— JamellNYT

BROOKLYN, NY, USA, February 19, 2020 /EINPresswire.com/ — Performing Artist KylieBear is set to perform this Saturday, February 22nd, along with many other well-known young performing artists and athletes, to raise money for cancer research.   The 4th annual Charity Basketball Game, "Rise Above Cancer", hosted by KidsWhattoKnow and BabyDunkUSA, will be held at PS 288 in Brooklyn, New York.

"I'm so happy I can sing and help people at the same time," said KylieBear, a young entertainer from New York City, who has consistently booked clubs, festivals and private events around the Tri-State area over the past 2 years.

"She was born to perform," said Musician  JamellNYT.  "She sings, she dances, she raps. It's unreal."

Known on social media as @iAmKyliebear and @KylieBear323, she is heavily involved in the street dance and music scene in NYC, which has lead to her strong local following throughout the 5 boroughs.

The performing artists are also scheduled to participate in the basketball events.

"I can't believe they want me to play in the game too. But I'll do my best," said Kyliebear.

To learn more about KylieBear and her upcoming shows, follow her @iAmKylieBear on all social media platforms.  For additional information on the event hosts, follow @KidsWantToKnow and @BabyDunkUSA on Instagram.