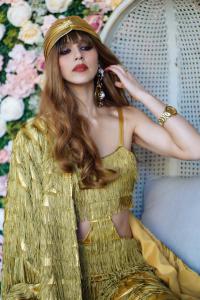 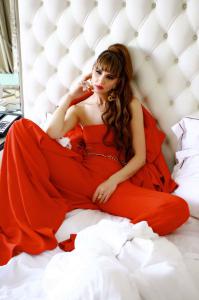 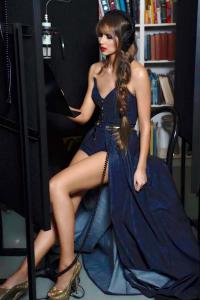 One day you hear about other singers on it, and now I'm there; it's definitely an out of body experience”
— Radmila Lolly

LOS ANGELES, CA, USA, January 29, 2020 /EINPresswire.com/ — We all know Radmila Lolly is an acclaimed classical singer, but over the past few months, her career has skyrocketed when she reached the top 25 of the Billboard Dance Chart with her single ‘U R Moving Me’ – Radmila Lolly ft Dani Hagan.

Worldwide press took notice of her recent achievements and Radmila has been featured in several magazines covers around the globe.

Radmila presented her last album “Wonderland” at the famous Carnegie Hall. She is also a high fashion designer, so she combined her talents as a singer and a designer, and presented her couture collection during her concert while putting up an unforgettable show.

Her fashion collection has been featured at Barneys Madison Avenue Trunk Show, alongside designers such as Zac Posen, Naeem Khan, J. Mendel, as well as at the Daytime Emmy’s Ceremony, and many more. It has been featured by Vogue Italia, and Harper’s Baazar, among others. Radmila Lolly has a huge number of requests from celebrities to wear her gowns for award ceremonies or red carpet events. We have seen a number of artists wearing Radmila Lolly’s dresses, such as Gayle King, Bebe Rexha, Mya, Miss Universe 2018, Miss USA 2018, Miss USA 2017, to name a few.

But not only Radmila sings and designs, her creative mind never stops and she has upcoming ventures that include a novel that corresponds to her next self-composed album and high couture collection.

You have also heard her music as the soundtrack for the movie “Honor Up” directed by Damon Dash and with executive producer Kanye West; Works with Mar Vista Studios. Radmila Lolly will be working on more soundtracks this year. Her next album is the soundtrack to her upcoming novel and audiobook.

Her gala concerts are usually attended by very respected musical artists such as Grammy-winner, Maxwell.

Lolly is a non-stop traveler who moved to Miami where she is becoming involved in the Miami community through her new church, Miami First Presbyterian. She volunteers to sing with their choir.

You can catch Radmila every week sitting in the front row of the Miami Heat games. Go Heat!

With the mindset of always going farther and improving, Lolly is learning as many instruments as possible; she is currently taking weekly lessons on the piano, violin, saxophone, and guitar.

Something that keeps her in the move is her workout routine. She works out almost every day, and to vary her routine; in addition to normal resistance and weight training, she plays basketball, tennis, swims, boxes, and dances.