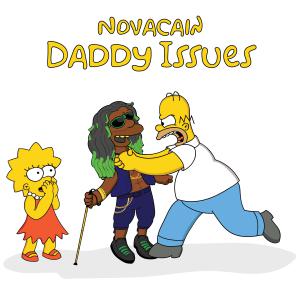 Daddy Issues was released on January 3, 2020

Releasing a song about girl's dads not liking him.

MIAMI, FL, USA, January 22, 2020 /EINPresswire.com/ — On January 3rd, NovaCain The Blind Rap God released his newest single “Daddy Issues” on Spotify. Within the first week of its release, music critics were giving the song rave reviews as it received over 35k Spotify streams and over 6k Spotify saves. What are the music critics saying? They are comparing blind rapper NovaCain to Grammy nominated rapper DaBaby.

“Daddy Issues” features hard-hitting 808s and a catchy hook, similar to DaBaby’s Grammy nominated song “Suge.” Where the songs defer is on their overall theme. In the verses, NovaCain describes the reasons why he thinks that the girl’s dad won’t like him. "He ain't gon like all this color in my hair, he ain't gon like that I dress real weird," raps NovaCain.

So how did he come up with this interesting concept? “I was talking to this preacher’s daughter and as she described her dad to me, I told her straight up that I didn’t think her dad would like me,” said NovaCain. With his neon green dreads, diamond studded jewelry, and rapper lifestyle, NovaCain may frighten many dads around the world. In his case, the cover of this book doesn’t tell the whole story.

After losing his eyesight at the age of 18, NovaCain has worked very hard to establish himself as a real player in the music industry. Selling over 11k iTunes units in 2019, NovaCain has remained humble throughout the success. “I’m cocky in my music, but I’m actually a pretty nice guy,” said NovaCain. “Even though I live a rapper’s lifestyle, I’m a very respectful person.”

Today, “Daddy Issues” has over 60k Spotify streams and has been added to over 440 playlists. In just its first week, “Daddy Issues” has been added to Spotify’s “Discover Weekly” playlist and has been receiving a positive reaction from Spotify users. Listen to "Daddy Issues" on Spotify and let us know if you think NovaCain is the blind version of DaBaby. Also, stay tuned for NovaCain’s “Daughter Smashing Tour”, which will be taking place in the Southeast region of the USA.