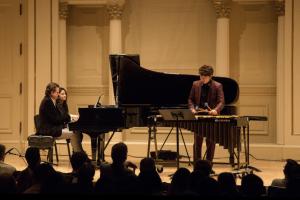 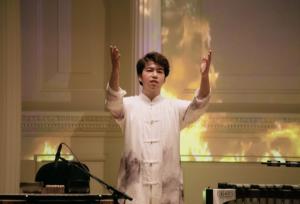 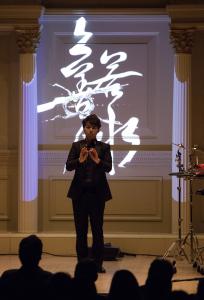 NEW YORK CITY, NY, UNITED STATES, January 6, 2020 /EINPresswire.com/ — The Paulus Hook Music Foundation invited Chinese percussionist, Shiqi Zhong, to present the percussion concert, “I Ching” at Carnegie Hall on December 27th, 2019. The concert left the audience in awe, not only through its virtuosity and musicianship, but also through its use of multimedia and other technologies. These new technologies included a real-time rendering GPU system, which was used in conjunction with the percussion performance on stage, making for an unprecedented level of innovation.

The concert opened with a world premier piece called, “Up Kind as Water.” Avant-garde composer and audio-visual artist, Lu Wang(dk), drew inspiration from the famous Chinese philosopher, Laozi. More specifically, Lu took interest in Laozi’s literary work, “Dao Te Ching,” and created a new form of musical performance based off of these principles. By combining percussive music elements with nature sounds, gestures, and a Kinect-based real-time A/V reactive system, Lu intends to reveal the state of water and its relationship with virtue through her work. Based on Lu’s unique concept, new media artist and creative technologist, Yiyao Nie, was invited to design an audio -visual system that leverages the power of machine learning and a customized real-time rendering GPU system to track and learn the performer’s gestures as they unfold. Simultaneously, this system will form the shape of water, bringing a minimal, but poetic and fluid visual art design experience to the show.

“When the Sun Goes Down,” another commissioned work by Shiqi Zhong, is composed by Chinese composer Heng Liu, who is also the principle percussionist of the National Center for the Performing Arts Orchestra and Executive Director of the Chinese Percussion Association. The piece was written specifically for hand percussion instruments and digital audio. The scene of sunset has always been a spiritual event for the composer, which inspired him to compose a work that unfolds the changing color of time and space during the sunset.

As one of the highlights of the concert, American Jazz pianist, Misha Piatigorsky, performed a unique Jazz vibraphone/piano duo with Shiqi Zhong, as well as works from a popular Jazz repertoire that included the likes of, “Milonga” and “Afro Blues.” Misha Piatigorsky is the great nephew of the legendary cellist, Gregor Piatigorsky. Moreover, he has been praised by the Boston Globe as an artist who “beautifully merges the worlds of serious jazz and pop.”

The grand finale of this concert featured a four-movement solo piece titled, “I Ching.” This piece was written by Danish composer, Per Nørgård, and it was inspired by the thousand-year-old Chinese oracle book. The 64 combinations of six “Yang” or “Yin” lines (bright or dark) featured in the book represent 64 different states of being for all living things. Not only is this work extremely demanding artistically, but it is also taxing physically for the performer. Shiqi Zhong’s breathtaking performance of this work has additional significance because he is the first Chinese percussionist to ever perform the work with visual arts. The visuals were designed by multimedia producer, Daniel Finn.

Shiqi Zhong, a rising star of today’s Chinese young percussionists, founder of RQ Music Entertainment, music director of Huamei Art School and the New York Big Apple Music Festival Contemporary Music Program, was selected by the All American Chinese Youth Federation as Top-20 under 30 elite. He was born in Nanjing, China, and began his percussion study at the age of three. Mr. Zhong previously studied at Yale School of Music, The Curtis Institute of Music, The Julliard Pre-College, and The Middle School of China Conservatory.