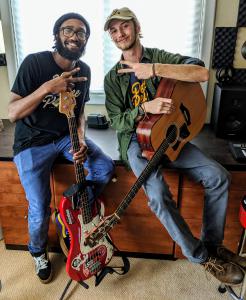 Billy Mercury & Evan Hurst during the filming of Emotional Terrorist

Executive Producer and Lyricist, Amy Havens Selleck, reflects on the crazy way this video came to fruition.
“Evan’s father had shared the teen’s music with me via text. His instrumentals were exemplary. One of his songs wouldn’t leave my head. It stuck. I asked permission to test run some lyrics and the rest is history.’
‘Ironically, the next day, I spoke with a friend who was in an abusive relationship with her bi-polar partner. That same night, I was involved in a heated exchange with a loved one. It hit me that EVERYONE has been on the giving and/or receiving end of mental illness. No one asks for it. No one wants it. Mental illness strikes unannounced like a terrorist in the night.EMOTIONAL TERRORIST was penned from feelings of utter frustration, anger and desperation.”

Evan’s response after first glancing at the lyrics is a testament to the depth of this young man’s spirit. “I now know what I want to do with my music. I want to use my music as a voice to reach more individuals and bring awareness to people and issues that are overlooked or forgotten.”

Cetre Pegues, Director of “Emotional Terrorist” stated that the project literally landed on his lap at the same time he learned about a friend who had been living in “emotional terror”. “When the project received the ‘green light’, I went into research mode. That is how the scissor scene came to be. I had no idea how many people cut themselves until I interviewed a friend.
I had been trying to work with Billy Mercury for a few years but the right one kept missing us. When Amy told me the sound she was looking for, I knew Billy was the perfect match.”

“I wanted someone who could sing raw lyrics with a smile on his face. I guess it was my subliminal message that no matter how bad things can get, you just have to keep going with a smile. Billy was a direct ‘bulls-eye’.”

Billy Mercury’s sound is the epitome of “feel good music.” The multi-faceted rapper/soul singer is known to be the “hidden gem” of the DMV music and Hip-Hop culture.

Recently, Mercury earned his spot on BET’s premiered music competition show, “The Next Big Thing”. Music magazines have likened his sound to such heavy hitters as Jay-Z, Anderson .Paak and the late J Dilla.

“When Cetre first presented the project to me, my first thoughts were, 'I’ll just sing what was written when I get it…' but when I heard the instrumentals, read the lyrics and realized a 17 year- old wrote the music, I was ALL in.”, exclaimed Mercury.

Evan recounts the moment when he first heard Billy singing the song during filming. “I thought to myself, Wow. This was just something I played on my guitar in my room. It’s not just music anymore. We created a MESSAGE. “

During production, it became apparent that all involved had their personal stories of how mental illness has affected their lives.

Lead actress, Brittany O’Neill was forthcoming in admitting that expressing herself through the character of Serenity was a therapeutic process for her own personal struggles. “This project was a humbling reminder that I can still reach those dark places as an actress. I really connected to the extreme ups and downs of this relationship.”

While diving into the research process, Selleck was shocked to learn the amount of people affected by mental illness. “Our society is suffering behind closed doors seemingly as our relationships crumble while the problem continues to grow.
One can clearly witness in our video how Billy and Serenity truly love each other. They are both desperate. They are both hurting. Billy doesn’t understand. Serenity feels hopeless.
These are not uncommon struggles in many of our households today. 80% of marriages end in divorce where addictions, major depression and anxiety are factors.”

Statistics shared by MentalHealth.gov are startling:

• One in five American adults have experienced a mental health issue.
• One in 25 Americans live with a serious mental illness such as schizophrenia, bi polar disorder or depression.

What were Evan’s final thoughts when asked what impact he hopes EMOTIONAL TERRORIST will have on the general public? “I would love for this song to shed light on the urgency of finding better resources to help those with mental disorders and also to help the loved ones affected living through the terror with them. There is such a negative stigma on this topic but it can’t get better until we can openly talk about it and be honest with ourselves and others.”