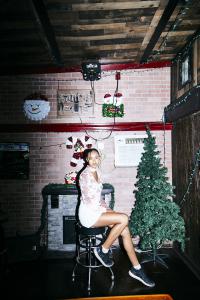 The video for “Family Drama” veers between the abstract and the mundane, playing more like its own short film than just visual accompaniment.

Lucy DK has the lyrical chops to write about anything she wants, and the kind of heartfelt, soulful voice that makes the listener feel like they’re hearing someone who understands, for maybe the first time ever. The UK-born, New York based composer has chosen to use her immeasurable gifts to illuminate the kind of deep, lasting wounds that most of us would rather pretend aren’t there. Her last single, “Drama,” tackled the stigma attached to women who stand up for themselves in problematic relationships. Next, instead of taking a breather, she shined that light inward to give a voice to some serious pain for “Family Drama.” She’s known for her self-penned acoustic folk confessionals but didn’t want to be confined to any one genre. A longtime fan of Solange, SZA, and Lauryn Hill, reaching into hip-hop and R&B came naturally, and she found the perfect collaborator in rapper and producer Aly “Lackhoney” Lakhani. They each wrote their own parts to the track, Lackhoney made the beat, and their blood-like connection is palpable throughout the devastating, super honest “Family Drama.”

Growing up without a father is tough enough, so what happens when he casually decides to make contact? How do you cope with that? Maybe, after you’ve tried isolating yourself and repressing the trauma, you write a song about it. Lucy turned the fallout into fodder for her most intimate, stunning song yet. Here, she exists somewhere between confidence and vulnerability, projecting an insightfulness through her breathy, reserved voice. Lackhoney lands on the perfect beat here, tense, staccato, dropping in and out. An icy synth, immaculate and bare, moves through the verses and choruses like rooms in an empty home. Lucy recites the coping mechanisms she’s been driven to, but unlike many of her peers, there is no bravado here, no kind of pride in her self-destruction. Lackhoney’s verse is no less dark, but points us toward the exit – “The best artists are kids in pain who use it.” Lucy DK is living that line with this and every other track on her upcoming full-length, Waterlilies.

The video for “Family Drama” veers between the abstract and the mundane, playing more like its own short film than just visual accompaniment. It was directed by Mariyam Shamshidova in Nashville but produced by Lucy herself, another big step for an artist who began her career writing songs alone in her bedroom. Throughout most of the clip, there’s almost no melodrama, no upheaval, but there’s certainly no peace. Alcohol flows freely, into or onto the actors. Set mostly in a very comfortable suburban home, they move around each other in very uncomfortable ways. A featureless black room feels like the recesses of a mind trying desperately to hide from itself. Even before her father attempted to re-enter her life, Lucy grew up repressing difficult things; maybe this is where her character feels most comfortable. As Lackhoney wraps up the track, the actors slowly, finally acknowledge one another as siblings, coming together for some much-needed, genuine affection. If only every long-held trauma ended this way.