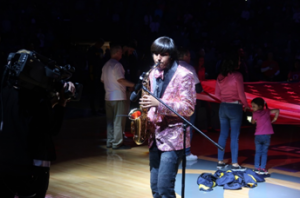 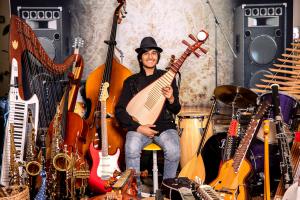 With the ability to play more than 100 musical instruments, Neil Nayyar, 14, showcased his saxophone skills while honoring breast cancer survivors.

It was truly an honor and a humbling experience to play the National Anthem at the recent NBA game here in Sacramento. I’m so grateful for having been given this opportunity.”
— Neil Nayyar

“It was truly an honor and a humbling experience to play the National Anthem at the recent NBA game here in Sacramento. I’m so grateful for having been given this opportunity,” Neil said. “I’ve been preparing and looking forward to playing my sax in front of everyone for months.

“The survivors who joined me on the court are all so brave. They provide hope to those who are currently battling the disease and serve as reminders that breast cancer doesn’t necessarily have to be a death sentence,” Neil explained.
Neil now joins a coveted list of musicians who’ve performed at the Golden 1 Center Arena during a Sacramento Kings’ game, including six-time Grammy nominee B.o.B., pop culture icon and rapper Vanilla Ice, hip hop artists T-Pain, Jay Sean, rapper Tyga and many more.

The multi-talent teen shows no signs of slowing down. In late-September, he performed at a fundraising event in Fremont, CA for former U.S. Vice President Joe Biden who is currently running for U.S. president.

On Nov. 5th and Nov. 8th, Neil will perform for Kaiser's Employee Award Ceremony at Kimpton Sawyer Hotel in downtown Sacramento. Neil will also perform in Las Vegas, Nevada on November 17th as part of an event sponsored by Celebration of Music, a talent search that showcases the best young musical talent across America. He’s also been invited to perform for the United Nations Sacramento Chapter and at a fundraising event for City of Elk Grove Mayor Steve Ly.

“Whenever I get a request to perform, it is such an honor. I’m looking forward to performing at each of these upcoming events,” stated Neil. “I also can’t wait to see what 2020 has in store for me. I feel like I am just warming up and big things are on the horizon.”

He recently signed an acting contract in Los Angeles through Conquest Management where he hopes to have the opportunity to be featured in upcoming commercials/TV/movies in both Hollywood and Bollywood.

In the meantime, he is currently writing music for his debut album which will feature all 107 instruments that he plays perfectly.

ABOUT NEIL NAYYAR: Whether it’s classical, Bollywood, jazz, rock, or pop – Neil Nayyar is heavily influenced by it all. His music inspirations include Miles Davis, Carlos Santana, Bruno Mars, Chris Martin and Billy Joel. He began playing music at just the tender age of six. Today he plays 107 musical instruments and has plans to learn even more. Homeschooled since the first grade, this gives him the needed flexibility his practice his instruments hours of his day.