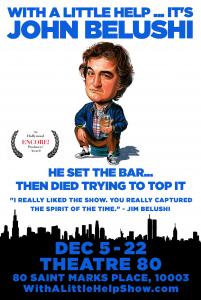 I really liked what you did. You captured the spirit of the time. I was there for that. I loved how aggressive you made John on stage.”
— Jim Belushi

NEW YORK, NY, USA, November 5, 2019 /EINPresswire.com/ — With a Little Help… It's John Belushi, an award-winning, multimedia production directed by Levy Lee Simon (“For the Love of Freedom,” “Bow-Wow Club”), and stars Jack Zullo ("Bell Canyon," "Epic Rap Battles of History,"), the show’s book writer and producer makes its Off-Broadway debut at Theatre 80 from December 5-22. The show takes the audience on an epic journey of John's 12-year rise to entertainment icon status complete with live music, videos, and heartfelt Belushi-inspired sweat. A percentage of the show's proceeds will benefit Gilda's Club and The Comedians Assistance Fund.

"Zullo’s performance is an honest portrayal of Belushi, not an imitation. I think the essence of the man is the most important thing that needs to come across," said Levy Lee Simon, With a Little Help…It’s John Belushi director.

Jack Zullo is a Los Angeles based actor, writer, and filmmaker, born in Manhattan and raised on Long Island, New York. He won the Producer's Award for "Live From the Grave…It's John Belushi!" (the original title of With a Little Help…It’s John Belushi) at The 2016 Hollywood Fringe Festival while playing the title role.

“I was always intrigued by John growing up and realized that no one had done a theatrical narrative about his life. I spent two years researching, then another two years writing a spec feature film script which morphed into this show,” said Jack Zullo, With a Little Help… It's John Belushi star, book writer, and producer. “Having Jim [Belushi] see and like the show really validated the work for me."

Zullo also currently serves as the Improv/ Sketch Outreach & Performance Workshop Coordinator at WeMakeMovies. He is stage trained by Sondra Lee (contemporary stage method), The Actor's Gang (The Style), improv taught by Keith Johnstone, Groundings (I, II). He is a Westside Comedy graduate, plus a litany of on-camera workshops, and has also appeared in hit comedy sketch shows "Friendly Neighbors" and "Bathroom Talk.”

Zullo leads a dynamic and versatile cast, including Keith Saltojanes (National Lampoon), Samantha Jane Gurewitz (UCB), and Stephanie LeHane ("Shame Of Thrones: The Musical") with the live music of acclaimed musicians, Crazy Tomes Band providing the beat and the backbone. The lighting design is by Alex Moore.

The entire pre-preproduction of the show, highlighting the creative and production process, is being filmed as a documentary by We Make Movies© award-winning filmmaker Eric Michael Kochmer.