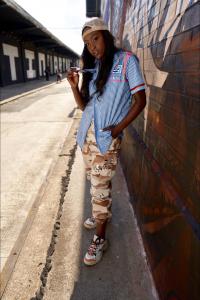 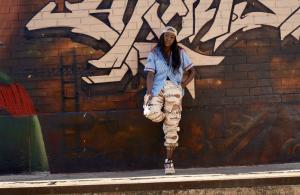 ATLANTA, GA, USA, October 17, 2019 /EINPresswire.com/ — Experiencing firsthand the devastating impact of gun violence by losing her father, Flau’Jae has made it her life’s mission to pick up the baton that was dropped when he was killed. Driven by her passion for music and dedication to lyricism, Flau’Jae holds her craft close to her heart and feels fueled by the legacy left behind by her late father and well-known rapper, Camoflauge.

As one of Georgia’s youngest Hip-Hop ambassadors, Flau’Jae recorded for the first time and released her debut album titled ‘Y'all Know Flau'jae’ in 2013. Since that time, Flau’Jae has toured with many popular music groups including OMG Girlz and Mindless Behavior going on to take the national stage making an appearance on Season 3 of Lifetime Television's "The Rap Game" which led to an appearance on Season 13 of NBC's hit show "America's Got Talent", where the young star received the show coveted Golden Buzzer.

Signed to Atlanta based Level’d Up Music Group in June 2019, listeners should be ready to expect the unexpected with Flau’Jae. Her delivery, skill level, lyrical ability, and natural star presence will shock the music industry and music lovers alike.

“Level’d Up Music Group is beyond excited and honored to have an incredible artist in the family like Flau’Jae. She represents us to the fullest and for that, we will do whatever necessary to guarantee her success. We believe she will go far beyond what any of us can imagine. We believe in her star power and talent 110% so stay tuned, this is only the beginning.”

A personal goal Flau’Jae has is to better the future for her family and loved ones. One of her professional goals is to stamp the industry as the best rapper her age, to come through and dominate. Ultimately, Flau’Jae is not to be underestimated.

For more information on Flau’Jae or to schedule an appearance or interview, please email adrienne@theipyagency.com

ABOUT FLAU’JAE
The young rapper, who has a heart of gold, is associated with many philanthropic organizations including the Frank Callen Boys/Girls Club where she coaches students in basketball. Flau'jae has participated in the Chatham County Youth Commission Rally as well as several Feed the Hungry campaigns. Committed to ending violence in her community and beyond through her civic merits and efforts, Flau'Jae was presented with a proclamation and Key to the City from the city of Savannah, Georgia. Homage was also paid to Flau’Jae’ s father for his work in the music industry and as a local music icon with the acknowledgment of CamoFlage Day. The official “Flau'Jae Day” in Savannah, GA makes Flau’Jae the first teen in the state of Georgia to have been presented with a Key to the City.