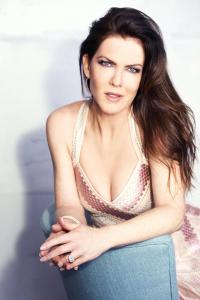 I love London and Having worked in the UK for months at a time over the years I consider it my home away from home. I have never been in London on Halloween and thrilled to be filming a scary movie”
— Kira Reed lorsch , Daytime Emmy Winner

Fresh off her Life Achievement Award at NVIFF in Amsterdam Kira Reed Lorsch is showing clear signs that her best work is yet to come as she begins filming the horror feature WITCHES of AMITYVILLE ACADEMY in London.
Kira just wrapped her role as the villainous soccer mom/human trafficker “Janice” in the action movie Beckman alongside Billy Baldwin and David A.R. White. She will portray Hollywood acting teacher “Ellen” in the upcoming drama series Rumors. Her latest comedy Crystal, with Kira as the lead character’s alcoholic, pill-popping boss “Linda”, is about to hit the festival circuit.
Continuing to choose diverse roles in multiple genres, Kira will now be “Sam”, one of three good witch sisters, alongside Donna Spangler and Brittan Taylor, in the horror-thriller WITCHES of AMITYVILLE ACADEMY. She will be shooting on location in England through early November with the London based company Proportion Productions.

No stranger to working in Great Britain, Kira hosted the long running news magazine show Sexcetera (Playboy UK, Sky One) and has enjoyed signings of her book SCORE How To Win The Girl Of Your Dreams at Hard Rock Cafe London.
“I love London and especially enjoy attending West End Theatre. Having worked in the UK for months at a time over the years I consider it my home away from home. I have never been in London on Halloween and am thrilled to be filming a scary movie at this spooky time”
For US/UK press inquires please contact: Neal Public Relations prstarus2000@yahoo.com (+1) 323-366-2796

Kira Reed Lorsch is an Emmy nominated actress and Emmy Award winning producer. After graduating the UCLA School of Theatre, Film and Television, Kira enjoyed a prolific on-camera career appearing in over 100 films and television shows. Kira gives back to numerous charitable organizations including Shelter Hope Pet Shop, The Thalians for Operation Mend, and serves on the Board of Trustees of the California Science Center home of the Robert H. Lorsch Family Pavilion. See more about Kira at KiraReedLorsch.com IG @kirareedlorsch