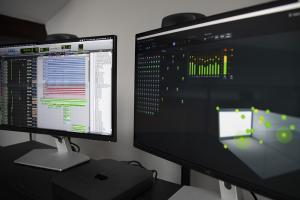 LIVERPOOL, UNITED KINGDOM, September 27, 2019 /EINPresswire.com/ — Jacaranda Records has announced the completion of Liverpool’s first immersive audio studio – opening up a rich pipeline of commercial 3D audio mixing and soundtrack design work for the facility from around the world.

Immersive or 3D audio is a high definition format currently being adopted at a rapid rate, with Amazon’s recently announced Echo Studio device and Apple’s new iPhone 11 both supporting the technology.

Jacaranda Records’ Capomaestro Ray Mia said: “We work in a seminal moment like the Mono-Stereo transition: Mono – Stereo – and now Immersive Audio, and Jacaranda Studios – the first music specific immersive facility of its kind anywhere in the world – has been conceived and built to work in this moment.

“It feels right that in the building which wrote the script for the modern music industry as we know it – giving Lennon & Sutcliffe a break – and being such an integral part of the formative history of the greatest band of all time, that we’re now honouring that tradition with a facility which not only delivers the best available audio technology to the heart of the city’s music community, but will also bring a rich vein of creative work into the region. ”

In addition to handling the immersive mixing & mastering for Jacaranda Records’ own roster, Jacaranda Studios already has a pipeline of soundtrack design & production, catalog remixing and binaural mastering work contracted from music producers, broadcasters and filmmakers in both the UK and US, with the first projects getting underway this month.

Announced last year, the immersive studio represents only the first stage of Jacaranda Studios’ development, with a larger facility in the advanced stages of planning with Merseyside-based businesses and scheduled for completion early 2020.

Immersive Audio – sometimes referred to as Spatial or 3D audio – offers listeners a 360 sound experience far enhanced to traditional stereo. The format can be adapted for use on virtually any system ranging from ordinary headphones to home theatre systems and cinemas, and has already been adopted by most Cinema Theatres, Apple TV, Netflix, Xbox, Amazon, Sky and a host of international broadcasters.

“Through products like Dolby Atmos and a few other systems out there artists and producers are able to reimagine music and sound design in three dimensions, offering a richer, more flexible sound palette to create unique immersive experiences for the listener, we’re talking about immersive narratives, telling stories through and with audio – whether that be on or off screen, it’s about painting pictures with sound ” Mia continued.

“That creates a lot of opportunities to innovate, from the way musicians record and produce music to connect with their listeners – all the way to how scriptwriters think about dialogue – and ultimately how filmmakers use sound to tell these stories to their audiences. We are an Immersive First label, the first of its kind, we have the street smarts, the experience on active works – and now with boots on the ground to offer the Music and Film/TV industries the tools they need to do all of this.

“With the format already being fast tracked by every major manufacturer, technology platform, Film Studio and broadcaster, Immersive Audio is fast approaching – or may well have passed its tipping point, with media & music companies creating new immersive mixes of their best selling works to meet anticipated demand… in a world of fragmented media, and ever increasing demands to command audience eyes and ears, Immersive Audio is more than an incremental gain that content creators cannot ignore. This is an experience upgrade.”