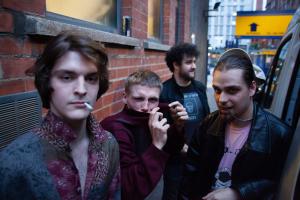 We've released more material in the last month than any artist or Label from Liverpool, and there's only one word to describe it all…YES…”
— Ray Mia

The sixth release of SPILT’s debut year resonates with the five releases already unleashed as episodes of their immersive story so far – mustering the Runcorn sound with all its infectious grit – telling their listeners exactly what they are.

“Are SPILT breaking new territory? YES… are they reimagining the Liverpool sound? YES… are they being original technically and creatively? YES… is there more to come visually and sonically? YES… Are they building a ground up global fanbase? YES… are they gaining momentum and getting wider critical acclaim? YES… Are we planning a national and international tour for crowds who want a raw experience? YES… so often bands play to the norm with a saccharin studio sound, sandblasting any talent away and making everything sound the same… it's nothing new, Big Corp music is only interested in dollars, the same as its ever been… SPILT are a refreshing power drill antidote to artists and Labels who don't innovate, who are happy with what music has become – both imaginatively and technically. SPILT are adopting spatial composition and taking it to a whole new level with the Immersive Engineers on our team… we've taken what we've learned and pioneered and infused it with SPILT'S energy and power to mix and release a whole new definition of what is new and original. There is no one out there doing this like this, we don't think people want to listen to the same plug-ins, we believe musicianship is more than copy and paste, drag and click… the guys are only scratching the surface of what they are capable of. We've released more material in the last month than any artist or Label from Liverpool, and there's only one word to describe it all…YES…"

From Immersive-first Label Jacaranda Records, specialists in spatial audio, the YES binaural master provides anyone using a set of standard headphones a three-dimensional audio experience – and richer stereo for anyone using speakers. The track is available to stream or download via Spotify, Apple Music, Amazon, Deezer and all major streaming services.

Jacaranda Records is a reimagined record label driven by immersive audio, with a street network of live music venues and record stores in the heart of Liverpool – The UK's music city.

Working with a wide international coalition of musicians, producers, managers and audio visual experts, the label provides a disruptive antidote to the traditional music industry ethos, forging new approaches to music creation, manufacture, promotion and distribution that leave control and revenues firmly in the hands of our artists.

We provide developing and established artists with a range of creative, technical and monetization services while preserving their full mechanical, publishing and IP rights. Artist focused, forward-thinking and expert in deploying innovative technologies and techniques through every stage of the recording, release, distribution and commercialisation cycles, the label works with a diverse range of creatives and performers to maximise the impact and returns for their work, all the while re-imagining, re-inventing and re-defining what impact and return means.
The latest evolution of the brand that launched The Beatles, Jacaranda Records is taking the soul of an organisation built on launching talent in a City where music is in its DNA, and forging a new path to support and build on the breadth of talent that walks its streets – all with an attitude and vision befitting its people and the global audiences who care about music.