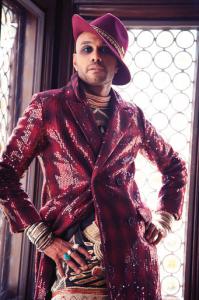 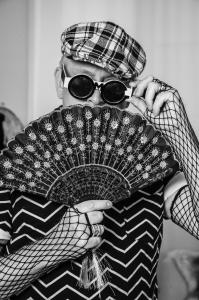 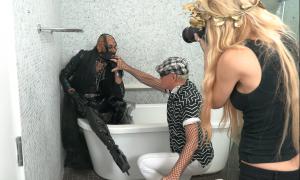 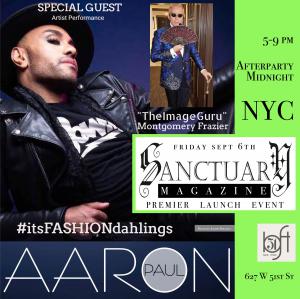 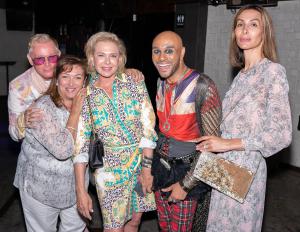 From celebrities to influencers to industry professionals, everyone pulls out all the stops during #NYFW, and the very often exciting and flamboyant Popstar will be no stranger to that rule and the runway. Fresh and running on his fashion heels, with his current #itsFASHIONdahlings promotional tour campaign, Mr. Paul will bring the party to his every #NYFW stop. Fashionistas in our very fashion-conscious, New York City, are already buzzing from Aaron's recent brand new single and music video release called 'FASHION #itsFASHIONdahlings'. A duet collaboration with Mr. "TheImageGuru" himself, A pop culture visionary, who fused music and fashion together throughout the 80' and '90s, The Former Fashion Director of MTV, 'Montgomery Frazier' "The Image Guru" @SohoMuse, Celebrity Stylist.

These two unofficial 'darlings' of fashion, along with their very appropriate hit song 'FASHION #itsFASHIONdahlings' will hit New York Fashion Week®'s runway shows that feature the latest trends in the fashion industry. New York is home to one of the four major fashion events held each year alongside London, Paris, and Milan. As the fashion capital of the world, New York is where the most influential designers come to showcase their collections at exclusive invite-only fashion shows.

1st stop for the "Project Runway" duo is Fri, Sep 6, 2019, 7:30 PM – Sat, Sep 7, 2019, 10:00 PM EDT. Singer Aaron Paul will grace his "#itsFASHIONdahlings" runway presence with, and recommended by Fashion Week Online (FWO), A much anticipated fashion event of #NYFW is back at the venue of a lifetime! hiTechMODA is producing its second season at National Geographic Encounter, located in the heart of the New York Theatre District, steps from the iconic Shubert Alley. Aaron Paul will give an exclusive "meet and greet" with fans, fashionistas, socialites and general fashion lovers, against a large plasma screen tv monitor. Which the official 'FASHION #itsFASHIONdahlings' music video will be continuously looped for the entire event, and on every surrounding TV screens inside the thrilling entertainment complex. Aaron will pose for photos, and sign autographs personally for the fashion thirsty guests.

With this event being held for the 1st time at the Times Square National Geographic Encounter, and its 'nature' theme, be sure that Aaron Paul will be dressed to "SLAAY".

Next, Fri, Sep 6, 2019, 5:00 PM – Sat, Sep 7, 2019, 4:00 AM EDT Aaron Paul will perform exclusively at Sanctuary Magazine launch event. Published by creative innovators Kenn & Korrie Gray Hayes, owners of Sanctuary Fashion Week – LA, NY, and London presents this 200 page glossy magazine at an amazing launch event at Loft 51 in NYC this Friday, September 6 starting at 5:00 pm and raging through the night until the next morning! one the most anticipated about event at the beginning of #NYFW, the party will boast the new Sanctuary by 360 Fashion Network collection which is a technology integrated clothing and accessory collection. Also on the scene is Internationally renowned DJ MotoeHaus of Haustronaut, as well as British pop star, Aaron Paul performing his latest chart-topping hits! Expect Aaron Paul to dazzle, shine, taught and titillate with his performance, that will give enough fashion for everyone. A NOT TO MISS event! Why?…because… #itsFASHIONdahlings with his collaborator "TheImageGuru" Montgomery Frazier.

It will be a very busy schedule for Aaron Paul with many of the events, parties, and appearances that he bounce to and from, or should we say 'DANCE' this #NYFW 2019. And counting the many outfit choices, Aaron is already considering. Save The Date for Sat, September 7, 2019, 12:30 PM – 9:00 PM EDT as Aaron Paul will be sitting VIP "front-row" while attending The Industry Fashion Show Spring – Summer 20 Runway Show at: Philippine Center " Freedom Hall " 556 5th Ave, New York, NY 10036.

With a new album (DANCE) in the wings, Aaron boldly approached legendary MTV Fashion Director, Montgomery Frazier "The Image Guru" @sohomuse, to collaborate on the new song he wrote, "FASHION" #itsFASHIONdahlings. From there, the two produced a fun "Shady and Divine" nod to the world of fashion, Past, Present, and Future.

Aaron Paul is a multi-talented singer, songwriter, model, and fashionista whose illustrious career spans three decades on two continents. Aaron's gift for music announced itself at an early age, and by his teenage years, he had assembled a local group that performed all over his native London, UK. Aaron in was discovered by the legendary 'Simon Cowell' who brought him into the nascent boy band Apart as its frontman. The group skyrocketed to worldwide fame, making Aaron and his bandmates household names. After performing with for several years, Aaron emigrated to New York City, where he emerged as a critically acclaimed Solo Artist, Host, Author, as well Aaron's expertise as a host and stylist enabled him to earn his badge as one of Us Weekly's Magazine Fashion Cops.

Aaron's contemporary discography showcases his talents as a vocalist, songwriter, and producer. His singles and albums enjoy widespread popularity, both at home in the US and far abroad. Aaron's breakout chart-buster, 'I Don't Care', was a worldwide #1 hit, and the "unofficial gay anthem" of 2014. His newest Album,'DANCE' will be released this summer 2019. And features music collaborations with new york city's very own legendary 'Village Voice' columnist and celebrated nightlife celebrity icon 'Michael Musto', Hip hop legend pioneering tv/radio show host 'Doctor Dre' and also 'Montgomery Frazier' "The Image Guru" @SohoMuse, Celebrity Stylist. The Former Fashion Director of MTV, with the anticipated summer release of their brand new hit single 'FASHION' (#itsFASHIONdahlings Mix) and music video.