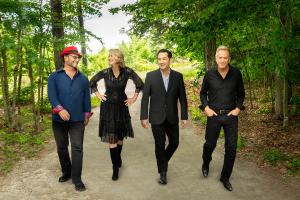 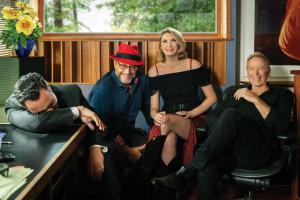 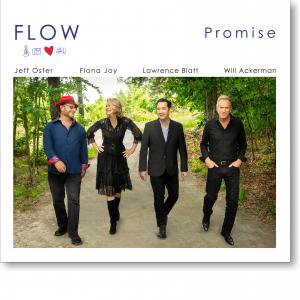 The music of Promise is a peaceful journey filled with emotional music that is layered and blended to perfection by multi-talented musicians…”
— Michael Foster, Ambient Visions

SAN FRANCISCO, CA, UNITED STATES, August 30, 2019 /EINPresswire.com/ — LMB Music announces the worldwide release of PROMISE, the second album by the popular foursome of friends known as FLOW. The core of the group – Will Ackerman, Fiona Joy Hawkins, Lawrence Blatt, Jeff Oster – returned to Imaginary Road Studios this summer, and along with Jeff Haynes and Tom Eaton — called upon their collaborative talents to explore, develop and record ten new melodic and imaginative tracks for their sophomore album, PROMISE. The group returns to New York City and Carnegie Hall’s Weill Recital Hall for the third time on September 27th, and will play Next Stage in Putney, Vermont on Sept 25. Tickets and music are available today at https://flowthegroup.com

On September 28th, FLOW will be live studio guests on Echoes.org, performing new music from PROMISE, and no doubt sharing laughs and behind-the-scenes stories with host John Diliberto. Their story is a familiar one — friends coming together in music, a shared recording history and a passion for playing live — and they’ve been highly successful at it despite their busy touring and recording schedules as solo artists. After debuting to a full house at Carnegie’s Weill Recital Hall in 2017, FLOW celebrated the release of their multi-award winning album with tours that took them from the New Orleans Jazz Museum, to Seattle, the Bay Area, the Los Angeles Grammy Museum, Nashville, Philadelphia and back to Carnegie Hall. The group charted at #1 on the Zone Music Report, and later collected wins for Best New Age Album at the IMA Awards at Lincoln Centre in NY, and Album of the Year at the ZMR Awards in New Orleans; they are currently nominated for two Peace Song Awards, and recently submitted PROMISE as a New Age entry in the 62nd Annual GRAMMY(R) Awards.

The new album brings with it an entirely new set of stories, artistic growth and evolution in their sound, perhaps emerging from a heightened confidence in one another. Michael Foster of Ambient Visions (August 18, 2019) pinpoints their accomplishment in an extensive review, writing “There's a fine line between a group of individuals who play music together and a group of individuals who blends their unique talents into creating music that is perceived not as individual efforts but as a shared movement in the same direction, with the same mind and with the same heart as to where they want to go… The music of Promise is a peaceful journey filled with emotional music that is layered and blended to perfection by multi-talented musicians who are able to “feel” the ebb and flow (pun intended) of the music as it moves from member to member and to respond musically using their own talents to further shape the song adding to it their own perspectives before passing it along to the next member of FLOW. The album is filled with heartfelt playing by everyone involved and shows that the perfect partnership that was created in the formation of FLOW has yielded an exceptional album filled with rich and relevant music…”

On might say that PROMISE gets to the heart of our most meaningful relationships. The group’s fans will enjoy the signature FLOW sounds they’ve come to love — guitar, piano, flugelhorn, ukulele, keyboards, percussion, and vocalizations — while delighting in new instrumentation. The live shows will include guest artists such as violinist Rebecca Daniel, guitarists Vin Downes (in NYC) and David Cullen (in Putney), percussionist Jeff Haynes and multi-instrumentalist/producer Tom Eaton.

For interviews and other media requests, contact Beth Hilton at The B Company,
mobile: 310-560-8390, or bethhilton(at)theBCompany(dot)com

ABOUT FLOW:
FLOW is an anagram of group member’s names — Fiona Joy Hawkins (Australian Pianist), Lawrence Blatt (acoustic guitarist), Jeff Oster (Flugelhorn master) and GRAMMY®-winning guitarist and producer Will Ackerman (of Windham Hill) – who came together out of friendship, a shared recording history and a passion for playing live and touring. After a full house debut at Carnegie’s Weill Recital Hall in 2017, FLOW celebrated their self-titled debut album, Flow, by touring some of the nation’s most passionate music cities: New Orleans, Nashville, Philadelphia, New York, Seattle and San Francisco, culminating at the Los Angeles GRAMMY Museum in 2018. Along the way, they picked up a coveted Album of the Year wins at the ZMR Awards in New Orleans, and Best New Age Album at the IMA Awards at the Lincoln Centre in NY. In early 2019, FLOW returned to Imaginary Road Studios in Vermont to complete their second album, PROMISE, produced by Will Ackerman and Tom Eaton, releasing August 30, 2019 on LMB Music. Visit FlowTheGroup.com for music, events, news and more.

“Last Light” from PROMISE by FLOW