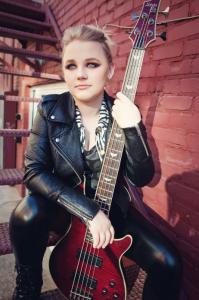 Bassist and singer Abby K has released “It Should Have Been Me.”

LOS ANGELES, CA, UNITED STATES, August 22, 2019 /EINPresswire.com/ — Abby K, a 16 year-old bassist/vocalist, is pleased to announce that her debut single “It Should Have Been Me” via The Orchard, a Sony subsidiary, is out now on all listening platforms. The Mooresville, N.C. rocker’s track features performances by Pat Gerasia and Dave McGarry from Billboard charting band Red Sun Rising and “new to the scene” guitarist Logan Foland.

Abby K has collaborated with her manager and producer, Eddie Z, to bring “It Should Have Been Me” to life as a powerful rock song with a pop hook. The song has been likened stylistically to Halestorm and Avril Lavigne by music industry insiders. “It Should Have Been Me” has also been praised by Alice Cooper’s guitarist Nita Strauss, who took a notice to Abby’s incredible talent early on and welcomed the young virtuoso to open for her on two different occasions.

“Abby K is one of the most gifted and focused musicians that I’ve worked with,” Eddie Z, 25-year industry veteran and owner of Charlotte’s The Playroom Rehearsal & Recording Facility, said. “It’s amazing to see this teenage girl walk onstage and deliver a ferocious, punch you in-the-mouth, performance. She’s a powerhouse.”

Abby K got hooked on hard rock after seeing Gene Simmons at a KISS concert that she attended with her dad. She put in the hours of practice to become the phenom that she is today. In the summer of 2018, she was one of only three bassists to be selected to attend Grammy Camp in Los Angeles. Abby K is focused on getting her music to the masses and improve at her craft every day.

Her age is a non-factor. “Just because I’m still in high school, it doesn’t mean that I take this lightly,” she said. “This is the career that I’ve been preparing for my whole life and I’m ready to be an inspiration to other girls that want to rock.”

Watch the Explosive “It Should Have Been Me” Video