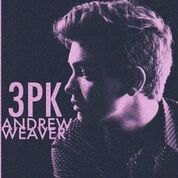 We haven’t stopped in the studio. I’m always writing, always creating. It won’t stop and I can’t wait to share it with you all.”
— Andrew Weaver

ATLANTA, GA, USA, August 19, 2019 /EINPresswire.com/ — At the top of the year, Andrew moved from his small hometown of Bremen, GA to Atlanta, GA to be closer to his management team and producer. Shortly following, he went on his ﬁrst national tour supporting Njomza (Ariana Grande) making his way throughout the West and East coast. After spending the summer in the studio, Andrew Weaver is set to follow-up his 2018 fall single releases with his ﬁrst EP, 3PK. This EP shows not only his growth over the past year but his dedication to his career. Andrew gives thanks to Atlanta’s music scene and artists for inspiring him to push himself and his songwriting. The EP begins with summer groovy and fan-favorite, “Icebreaker”, that follows Andrew as he navigates the ups and downs of ﬁrst dates. “Small Talk” hits with a big chorus pointing out the difﬁculty of pointless small talk and desire to discover more below the surface of people. “Autopilot” pivots from his acoustic-pop sound and brings the listener into a moody and trance-like pop vibe. With a dedicated and ready-for-more fanbase, this EP is highly anticipated but don’t expect Andrew to stop here, “We haven’t stopped in the studio. I’m always writing, always creating. It won’t stop and I can’t wait to share it with you all”.

About Andrew Weaver:
Singer-Songwriter Andrew Weaver (Atlanta, GA by way of Bremen, GA) began gaining attention as a 16-yr old contestant on ABC’s 2018 Season 1 American Idol, making it to the live taping in Los Angeles. After being eliminated in the ﬁnal round of auditions, Andrew remained a TV favorite garnering a dedicated fan base in Georgia and nationally, aptly naming themselves BeWeavers. After getting a taste of success from American Idol, Andrew has not stopped working towards his goals, “After American Idol, I told my mom that this is it. This is going to be my life.” Upon heading to Atlanta, Andrew caught the attention of producer 808Blake (J.I.D, Earthgang, Nappy Roots) who took notice of his songwriting ability. The two began working on his debut single, “Yes or No”, that quickly saw success. Since, Andrew has stayed busy in the studio, constantly writing and reﬁning his sound. At only 17 years old, he has been accepted through American Idol, The Voice, and went on his ﬁrst national tour with Njomza (Ariana Grande). With new music on the horizon and an already impressive resume for his age, Andrew is excited to keep working hard doing what he loves.