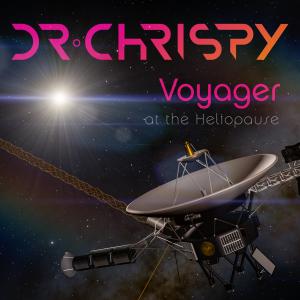 Dr Chrispy – “Voyager at the Heliopause”

SAN FRANCISCO, CA, USA, June 10, 2019 /EINPresswire.com/ — DR CHRISPY (aka Dr. Chris Boshuizen) is an award-winning aeronautical engineer, music producer, and songwriter who has spent the last 16 years tragically torn between two loves: Music and Space Exploration. His new single “VOYAGER AT THE HELIOPAUSE” will release online everywhere music is streamed and sold on June 14, 2019. The single is a tribute to the NASA Voyager spacecraft that launched in 1977 and returns stunning images from our solar system that inspired Chris to pursue his passion for space. Accompanied by a music video featuring historically accurate animated recreations of those classic images, “VOYAGER AT THE HELIOPAUSE” is a soothing and ambient electro space jazz track.

DR CHRISPY runs his home studio in San Francisco where he is actively writing and recording new music. DR CHRISPY’s first full-length album VHS released in 2018 and was widely praised by national and international reviewers. A collection of mostly instrumental tracks, Chris began writing VHS in 2003 while traveling as an aerospace engineer. The tracks were written all around the world and capture the vibe of each place and moment in time. Exclusive Magazine calls VHS, “a wonderfully ambient, bouncy, fun, even thoughtful at times collection of instrumental tracks,” while BabySue.com says, “Whether you're out clubbing or at home trying to get things done, these nifty little rhythmic creations will likely be just what the doctor ordered to get things going.” VHS plays like an auditory travel diary, inviting you along to hear and experience the evolution from Dr. Chris Boshuizen, Space Scientist, to DR CHRISPY, the Artist.

Having worked at NASA for almost five years inventing new kinds of spacecraft, Chris went on to cofound the company Planet Labs, which launched and monitors over 200 spacecraft that create a daily map of the global environment. During all this, Chris spent nearly every spare moment writing music on the one instrument he always had with him: his laptop. Much of his music was written at airports or on planes, and over a 16-year period he has amassed an impressive catalog of material with over 300 tracks. Wanting to get some of his music out to the world, Chris decided to pursue his art full-time, adopting the nickname “Chrispy” that was given to him by his NASA co-workers. Unlike other notable “doctors” in the music industry, DR CHRISPY has a PhD in Physics, and in 2014 he won the Advance Global Award for being the Greatest Australian Not Living in Australia.

Chris bought his own computer in 1998, but using it for homework was an afterthought. Instead he built an audio workstation complete with an 8-channel studio sound card and mixing desk and set out to learn studio engineering and mixing. He also took up frequent guitar lessons, but over time his music workstation was replaced with a laptop, and as his space career took off, Chris naturally developed a new habit of producing electronic music while traveling. After completing his PhD in Physics at the University of Sydney he found a position at NASA Ames Research Center in Northern California, one of NASA’s 10 centers around the US. There Chris worked on several fascinating projects, including a lunar lander, an electric airplane, and he also co-invented the world’s smallest satellite called PhoneSat.

With the success of PhoneSat, Chris and his friends were emboldened to try something ambitious, so they left NASA to start Planet Labs. Today Planet Labs has launched over 200 satellites that were designed under Chris’s leadership. Leveraging his years of experience with computer music, Chris has taught the introductory workshop on electronic music production at the last two annual Taxi Road Rallies in Los Angeles.

Chris has no regrets about pursuing his space career, but always felt music would one day become his focus. With a lifetime of music production experience and a lower-stress job that afforded him a bit more free time, he assumed his alter-ego as DR CHRISPY and suddenly entered a prolific phase of writing with the feeling he now had something to say. DR CHRISPY’s goal as an artist is to connect music and tech while bringing a message of hope and empowerment to his audience.

In 2016, DR CHRISPY began creating lyrical songs in addition to his instrumental music. This material will be released on his next album project. Chris still hopes one day to take himself beyond the Earth’s atmosphere, and feels he still has the passion to start another space company one day. You can catch more of Chris’s space and technology thoughts on his personal twitter account at twitter.com/cboshuizen.

“VOYAGER AT THE HELIOPAUSE” will release online everywhere music is streamed and sold on June 14, 2019.