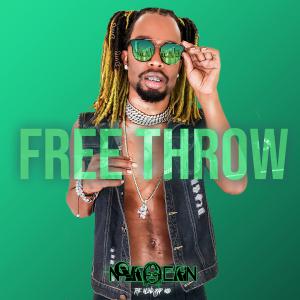 Is this the next viral phenomenon?

While writing Free Throw, I thought about all the emotions I experienced playing basketball. I wanted to make something that was fun and could be heard in basketball gyms throughout the world.”
— NovaCain The Blind Rap God

MIAMI, FLORIDA, UNITED STATES OF AMERICA, June 7, 2019 /EINPresswire.com/ — As a kid, what did you want to be when you grew up? NovaCain The Blind Rap God had big dreams of being an NBA superstar. He spent hours practicing his handles, perfecting his jump shot, and playing pick-up games. All that hard work was for nothing, once he began losing his eyesight at the age of 17. "Without basketball I was truly lost," said NovaCain. "There was a big gap in my life that was filled with depression."

After learning how to live life as a blind man, NovaCain decided that he wasn't going to let his depression get the best of him. "I got tired of being sad," said NovaCain. "When you're depressed, life keeps going even when you don't feel like going on." Luckily he found a new passion, creating original songs.

Today, NovaCain The Blind Rap God is a rising star within the music industry. Partnering with Grammy-Award winning producer Cassius Jay, NovaCain has created what critics are describing as a hit song. “While writing Free Throw, I thought about all the emotions I experienced playing basketball,” said NovaCain. “I wanted to make something that was fun and could be heard in basketball gyms throughout the world.”

Like most viral songs, Free Throw is accompanied by a dance created by The Blind Rap God himself. “Since I’m blind, I had to keep it simple to make sure I don’t trip over my own feet,” said NovaCain with a huge smile. The dance consists of a side step, crossover motion, and ends with a jump shot… Swish! Free Throw is available on all platforms for streaming.