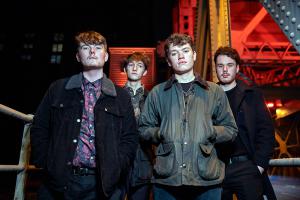 It’s a refreshing change in the way music does business and we’re glad to be part of it.”
— David Wallbank

The deal follows several months co-operation between the two labels over local acts The Bohos and Spilt, with Jacaranda stepping in to invest in both bands as part of an agreed development plan prior to formally signing them earlier this month.

Under the terms of the agreement Anvil have seen a return on their investment into the artists while both labels are set to continue to cooperate across a range of activities in the months ahead.

Ray Mia, Capomaestro at Jacaranda Records, said: “Anvil have a track record of developing artists and were first to spot the nascent talent and huge potential of recent Jacaranda signings The Bohos And Spilt. They put their faith and their money into the acts, and we’re both deeply respectful of that and looking forward to working with them on a number of fronts in the future.”

David Wallbank, Managing Director of Anvil Records, also commented: “We’ve been on a journey with Spilt and The Bohos, and are proud to have got them this far, but agreed the time is right for them to move on to the next stage of their careers and were delighted to be able to work with the Jacaranda team to make that happen.

With both bands’ original contracts expiring next month, Anvil have assigned all assets and prior work to Jacaranda – which has in turn returned all rights to the artists – while future collaborations including Anvil showcases at Jacaranda Records Phase One venue are already in planning.

Since beginning work with Jacaranda Records The Bohos and SPILT have had a significant investment in terms of equipment and rehearsal space and studio time. The Bohos are working on new material in the studio having recently completed a national tour supporting Cast. SPILT – also preparing for a new release – are set to announce supporting a major American artist at their only UK show in London on January 31st.

“Whether you’re talking to an artist, a producer, or another label, the key is to do it the right way. Just as we believe that artists should own the rights to their own output, we also think that you should treat other labels with respect,” said Mia.

“With Anvil we had a choice between waiting for the bands’ contracts to expire and grabbing them for nothing, or offering transparency, partnership and support. We chose the latter because while it’s not what the Industry is used to or built for, it’s only through decency, respect and cooperation that real progress can be made.”

David Wallbank added: “This deal has been about two things; mutual respect and putting the artists’ interests first and foremost. By recognising and rewarding the sterling work Anvil Records have put into nurturing both artists, Jacaranda have not only done this the right way, but have enabled us to reinvest in another round of exciting young bands for the future.

“It’s a refreshing change in the way music does business and we’re glad to be part of it.”

About Jacaranda Records
Jacaranda Records is an immersive-first Musik Haus based in the heart of Liverpool's creative community, and if content be King, then creativity is King Kong.

Working with a wide international coalition of musicians, producers, managers and audio visual experts, the label provides a disruptive antidote to the traditional music industry ethos, forging new approaches to music creation, manufacture, promotion and distribution that leave control and revenues firmly in the hands of our artists.

Jacaranda Records provides developing and established artists with a range of creative, technical and monetization services while preserving their full mechanical, publishing and IP rights. Artist focused, forward-thinking and expert in deploying innovative technologies and techniques through every stage of the recording, release, distribution and commercialisation cycles, the label works with a diverse range of creatives and performers to maximise the impact and returns for their work, all the while re-imagining, re-inventing and re-defining what impact and return means.

Jacaranda Records is taking the soul of an organisation built on launching talent in a City where music is in its DNA, and forging a new path forwards to support and build on the breadth of talent that continually walks its streets, all with an attitude and vision befitting its people and the global audiences who care about music.