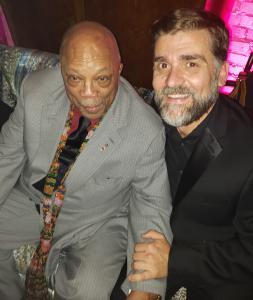 Quincy Jones, a Rock & Roll Hall of Fame inductee, has won 28 Grammy awards including the Legend Award in 1992, one of only 15 people ever to receive it. Chef Filippo Sinisgalli wishes Jones a Happy 85th Birthday. Photo: Raffles Entertainment. 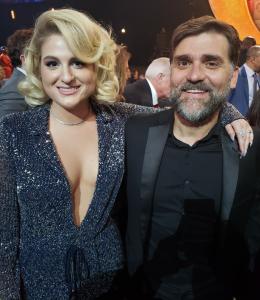 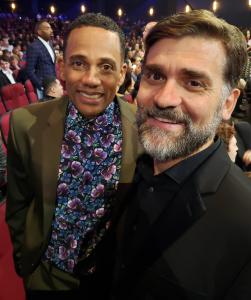 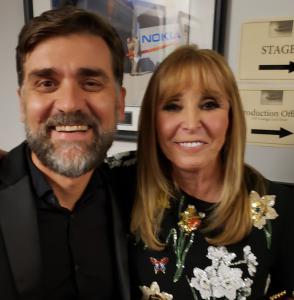 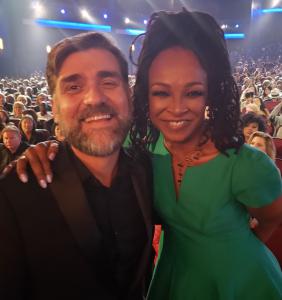 Oprah Winfrey hosted the Q85: A Musical Celebration for Quincy Jones on September 25 at Microsoft Theater in Los Angeles

Quincy Jones is a treasure to the world. It was an honor to meet a living legend and celebrate his birthday milestone with so many talented people in the TV, film and music industry.”
— Executive Chef Filippo Sinisgalli, the "Italian Chef to the Stars"

"Quincy Jones is a treasure to the world," said Sinisgalli who traveled from Bolzano, Italy to attend the Q85 event. "It was an honor to meet a living legend and celebrate his birthday milestone with so many talented people in the TV, film and music industry." Jones, who is from Chicago, Illinois, is a true pioneer and visionary. During his lifetime, he has worn many hats as a conductor, actor, musician, record producer, composer, arranger, television producer, instrumentalis, magazine founder, company executive and humanitarian. The music icon is memorialized in the new documentary “Quincy,” directed by actress Rashida Jones, his daughter, which is available on Netflix as well as a limited theatrical release.

Both the worlds and schools of thought with Jones and Sinisgalli, in their respective areas of expertise and as humanitarians, are not too different. The Michelin Starred Chef Sinisgalli is known in Hollywood as the master of creating a strictly “Made-in-Italy” food experience. As a connoisseur of Italian gastronomic culture and a tireless talent scout, Chef Sinisgalli is Il Palato Italiano’s ambassador in Italy and around the world. For the second consecutive year, Il Palato Italiano is one of the main sponsors and donors of the annual Celebrity Fight Night Italy, one of the most important charity events brought to Italy by the Golden Globe award-winning Italian singer, songwriter, and record producer Andrea Bocelli. The event benefits the Muhammad Ali Parkinson Center and the Andrea Bocelli Foundation.

Jones’ legacy and body of work places him as a modern-day impresario of global entertainment. Jones is undoubtedly a master of discovering and cultivating talent, creating, arranging and producing timeless music. During his lifetime, Jones has brought the world visual and audio experiences that are unforgettable. Among the many philanthropic works that Jones has spearheaded, one of his projects, the School’s Center for Health Communication through Project Q, is a strategic initiative to advance the health and well-being of children worldwide.

For an interview or to schedule a culinary experience with Executive Chef Sinisgalli, contact Raffles van Exel of Raffles Entertainment at 310-925-8448 or raffles@rafflesentertainment.com.

About IL Palato Italiano
IL Palato Italiano is a food hunter of niche products made in Italy that instead of being offered to the public through a mass market e-commerce, are placed at the center of all the activities that make up the offer of this food service provider excellence, committed to the dissemination of Italian culinary art through exclusive tailor-made experiential activities, carried out around the world. Recent successes have seen IL Palato Italiano at the pre-Oscar Gift Lounge 2017 and 2018 in Beverly Hills, alongside the American Foundation during their charity events such as Celebrity Fight Night 2017, or in the private homes of VIPs, including Actor Alan Cumming's Housewarming Party in New York. IL Palato Italiano's B2B or B2C audience often intercepts with local PR that organize tours on which a timely calendar is programmed to move the Italian brigades under the aegis of Executive Chef Filippo Sinisgalli. London, Miami, Paris and soon Shanghai and Tel Aviv are just some of the destinations where IL Palato Italiano has operated as an all-in supplier of all-round Italian experiences: we call them precisely Italy, out of Italy.